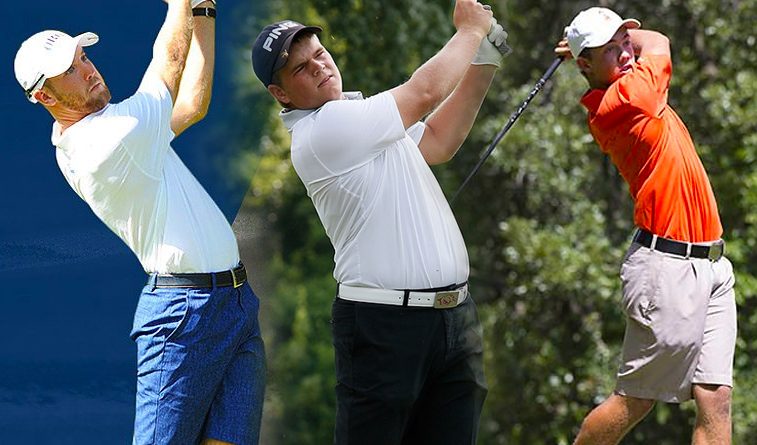 Three collegiate titans and a virtual unknown have reached the semifinals of the Oklahoma State Amateur Championship at Southern Hills Country Club.

Brendon Jelley, a senior at Oklahoma State who won this event in 2014 and 2015, as well as Mason Overstreet of Kingfisher, the 2017 NCAA runner-up at Arkansas, and Cody Burrows, the Summit League Player of the Year at Oral Roberts, are the known quantities. They are joined by Bryce Newell of Oklahoma City, the No. 58 seed, but a hot player who drilled Wesley Jackson of Fort Gibson 5 and 4 in the quarterfinals.

Overstreet and Burrows start the semifinals at 8 a.m., followed by Jelley against Newell at 8:07. The championship match begins at 12:30 p.m. Spectators are welcome.

Burrows won his morning match against Oklahoma City’s Ben Klaus 5 and 3. Burrows rode a hot putter to the morning victory, but the quarterfinal match against Hughes was hard earned. He took a one-up lead with a birdie on nine, but Hughes struck back with an eagle on the par-5 13th.

Burrows reclaimed the lead with a par on the par-3 14th. Both players birdied the par-5 16, including a 20-footer by Burrows.

“That was a big putt.” Burrows said. “I figured I had to make birdie there because with Xander’s length off the tee, he’s making birdie no matter what. With 18 being as hard as it is, he’d have to birdie 17 to force extra holes, so there was a lot riding on that putt, and it went right in the middle.”

The two would have halve 17 with bogeys. Hughes had to go for it on 18, but lost it right and was forced to re-tee.

Burrows will face Overstreet, who went 20 holes to defeat Dillon Jordon of Ardmore in his quarterfinal match. Overstreet has been working on a swing change since the collegiate season ended, but has pulled his game together at the right time in each match to survive. He was four down in his morning match to Mason Keller of Tulsa before rebounding to win one up.

“I had Mason last year in the second round and he knocked me out on the 16th, so I’ve been matched up with him before.,” Burrows said. “But I’m just going to try to make good scores and not worry about what he’s doing.”

Jelley knocked off Southern Nazarene’s Rhett Bechtel 2-up in the morning and faced third-seeded Christopher Noel in the afternoon.

“I knew going in that Chris was a great player, we both play at Cedar Ridge, so I knew it was going to take a good round to win,” Jelley said “I stayed away from trouble for most of the day and just hit a lot of fairways and greens and made a few putts. So I got a couple up on him and just kept the pedal to the metal on the last few. Everything’s just working right now.”

Jelley had Noel, the oldest player remaining in the field at 34, four down until Noel holed out on the par-4 15th from the fairway for eagle. He nearly eagled the par-5 16th, but settled for birdie. Jelley made birdie as well to close the match out 3 and 2.

Newell, who along with his brother, former Oral Roberts golfer Scott Newell, has won several four-ball tournaments around the state, defeated Chris Mariana of Edmond 2 and 1 in the morning match before taking down Jackson.

Round of 16 & Quarterfinals Results