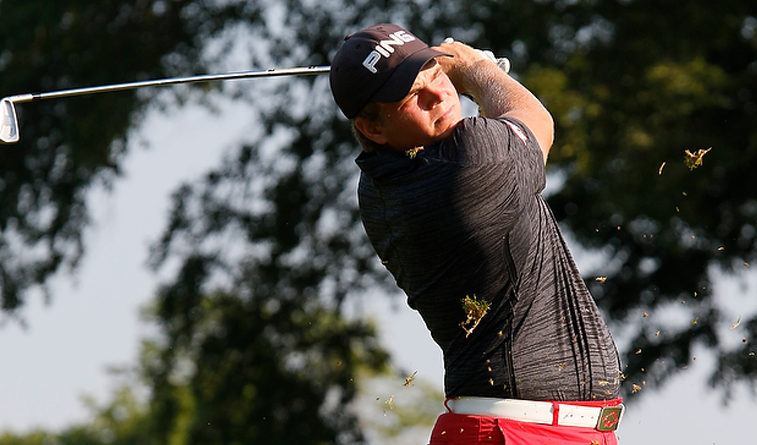 Reigning NCAA champion and 2015 Patriot All-America champion Braden Thornberry sits two shots back at 4-under after a 4-under 66 in the second round. Thornberry, a junior at Ole Miss, is currently ranked 2nd in the World Amateur Golf Ranking.

Among other players with Oklahoma ties in the field, Austin Eckroat of Edmond and Oklahoma State is tied for 16th at 1-over after rounds of 68-73. Mike Biata of Owasso and Oral Roberts is tied for 32nd at 4-over, while Quade Cummins of Weatherford and the University of Oklahoma is tied for 40th at 5-over (73-72). Further back are Tyson Reeder of Edmond and OSU, tied for 62nd, while Cody Burrows of Chickasha and ORU is tied for 73rd and Sam Stevens of OSU is tied for 77th.

Now in its seventh year, The Patriot All-America Invitational features a field of 84 PING All-America golfers from all three NCAA Divisions, NAIA and NJCAA rankings as well as from U.S. Military Academies and universities outside the United States. Current PGA TOUR stars who have played in The Patriot All-America during their college careers, include: 2017 US Open champion Brooks Koepka (2011), 2017 PGA Championship winner and FedEx Cup champion Justin Thomas (2011), Patrick Rodgers (2011), Daniel Berger (2012) and Bryson DeChambeau (2013).

What separates The Patriot All-America from other collegiate golf tournaments is participants play for more than themselves or their school. Each golfer honors a fallen or severely injured soldier by carrying a golf bag bearing the name of that soldier. Before the tournament, participants receive a card with the soldier’s story, so they can be familiar with who that person was, what they represented and how they were killed or wounded in action. At the conclusion of the tournament, the golf bags are shipped to players’ schools and auctioned with all proceeds benefitting the Folds of Honor Foundation, which provides post-secondary educational scholarships for children and spouses of military service men and women killed or disabled while in active service.

Final round action will begin at 9:30 AM, with the leaders teeing off at 11:40 AM. The final round is expected to conclude at approximately 4 PM. For more information including complete results, visit www.patriotallamerica.com.

Top 10 Results From 2nd Round:

Your 2-under par 68 currently puts you one shot off the lead, how do you feel about it?

I feel pretty good about it. I had a rough start. I bogeyed two of my first three, but was able to get it back in the middle of the round and birdied 13 and 14 to get back to 3-under. Unfortunately, I pulled my last putt (on 18), but it’s no big deal.

Plan coming out for tomorrow?

Just the same. I’ve been driving it pretty well the last couple days and you’ve got to get it in the fairway to score well. And, being in the final group, I guess, should help.

My wedges were pretty good today. In the middle of the round, when I really scored well was when I was hitting my wedges close and put it in the fairway. That’s really what you have to do, keep it in the fairway and give yourself uphill looks. Downhill putts can be pretty treacherous out here so, probably just more of the same tomorrow.