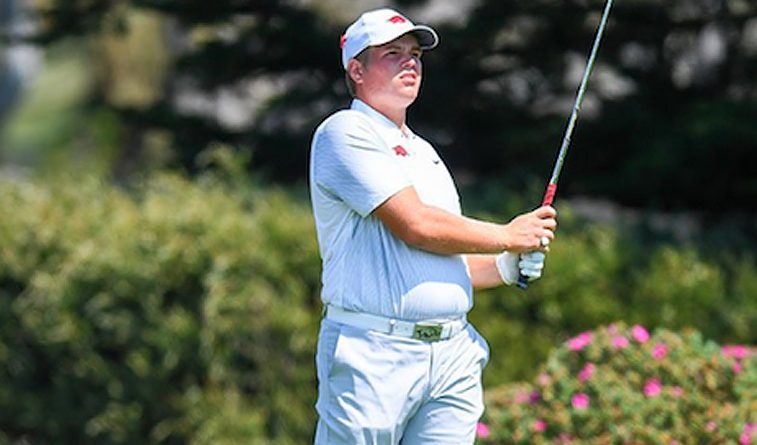 Photo: Mason Overstreet birdied nine-times in the final round.

LITCHFIELD PARK, Ariz. (December 31, 2017) – Mason Overstreet, a sophomore at the University of Arkansas hailing from Kingfisher, shot a final round 6-under par 64 to finish at 11-under par (199) for the tournament and win the 2017 Patriot All-America Invitational at The Wigwam in Litchfield Park, Ariz. Overstreet finished six shots ahead of Austin Eckroat of Edmond and Oklahoma State (-5, 205), Patrick Fishburn of BYU (-5, 205), SM Lee from Dalton State College (-5, 205), George Cunningham from the University of Arizona (-5, 205), and Garrett May of Baylor University (-5, 205).

In May, Overstreet finished second to Braden Thornberry at the NCAA Individual Golf Championships at Rich Harvest Farms golf course in Sugar Grove, Illinois. Thornberry, the 2015 Patriot All-America champion and current number 2 ranked player in the World Amateur Golf Ranking, finished T15 with a final round 74 (210).

Overstreet, who is currently ranked 118th in the World Amateur Golf Ranking, played in honor of U.S. Army Sergeant Jesse J.J. Castro. Castro was killed during Operation Iraqi Freedom when an improvised explosive device detonated near his vehicle while on patrol in Hawijah, Iraq. Each golfer playing in The Patriot All-America honors a fallen or severely injured soldier by carrying a golf bag bearing the name of that soldier. Before the tournament, participants receive a card with the soldier’s story, so they can be familiar with who that person was, what they represented and how they were killed or wounded in action.

Overstreet’s -11 under par ties Cory Whitsett of the University of Alabama in 2011 for the lowest winning score in the tournament’s seven-year history. Eckroat matched Overstreet with a final-round 64 to earn the tie for second.

Among other golfers with Oklahoma ties, Quade Cummins from Weatherford and the University of Oklahoma tied for 35th at 5 over, Mike Biata of Owasso and Oral Roberts University tied for 46th at 8 over, Tyson Reeder of Edmond and OSU tied for 53rd at 9 over and Cody Burrows of ORU and Sam Stevens of OSU tied for 61st at 11 over.

In its seventh year, The Patriot All-America Invitational featured a field of 84 PING All-America golfers from all three NCAA Divisions, NAIA and NJCAA rankings as well as from U.S. Military Academies and universities outside the United States. Current PGA TOUR stars who have played in The Patriot All-America during their college careers, include: 2017 US Open champion Brooks Koepka (2011), 2017 PGA Championship winner and FedEx Cup champion Justin Thomas (2011), Patrick Rodgers (2011), Daniel Berger (2012) and Bryson DeChambeau (2013).

How does it feel?

Oh it feels awesome, I mean this is definitely one of the better fields we play. I played outstanding today. I mean the putt on 18 was just a big bonus, but it was just a really fun week.

I pushed that a little bit, the second shot, but it worked out. That putt, I knew if I just got it rolling it had a good chance of going in and it just fell over the front edge.

It was nice, I knew I had a four of five shot lead on 18 tee, so I knew if I just got a three wood out to the right it was going to be fine. I just hit it right in the middle of the green here and luckily the putt fell. I hit a gap wedge into 18 and had a 30-foot putt. Birdieing the final two to win is definitely a confidence booster going into the spring semester as well as just nice to finish off with a win.

What was it that was clicking for you this week?

I drove the ball really well this week. I missed a few short putts here and there, but I made more than my fair share of 15 footers and I was hitting my irons really well, so pretty much my whole game was going really well.

Coming into today, did it feel like the kind of day you had today?

I had a really good warm-up session on the range, so I knew coming to the first tee that I had a little confidence. Then I bogeyed the first hole. Every once in a while, that can be a little bit of a step up. To get that first bogey out of the way and kinda get you going for the day. Then I birdied the next four, so that was a little bit of a rough start, but I knew if I’d kept going the way I had been, I’d end up doing well.

What has the experience been like this week aside from the golf?

This week has been a really nice week. The weather was awesome. I mean where I live it’s about 20 degrees. The trip to Luke Air Force Base was really something special. Getting to see our military personnel and everything and what they do. They were so gracious in letting us come out there and visit. I didn’t get to go to where they had the game room, I was too tired, but I bet that was awesome too.

The tournament’s connection with Folds of Honor, does that make this thing more meaningful?

Yes, definitely it does. Playing for a fallen soldier puts a little bit extra on this tournament. Knowing you got a guy there with you, who you’re playing for and how you do, not really reflects on him, but will get his story out there a little more.

Ever played in a Web.com Tour event?

What can you build off of after an event like this?

Mainly, just knowing that I can close and finish well. Birdieing the last two holes. The two putt on 16 was really the one that got me going – over the hill. I made a good second putt there. I knew I had a four shot lead coming to the last two, so I tried to stay aggressive, try not to get complacent. With the four shot lead sometimes you can just try to play to the middle of the green. What had been working for me all week, was going at the flag, so I figured might as well keep doing it.