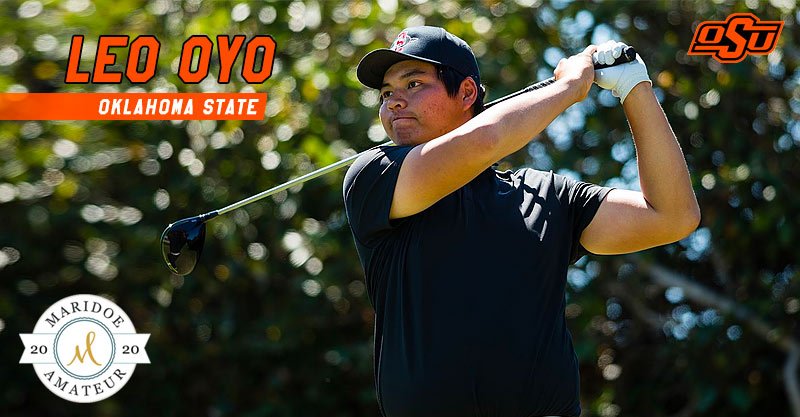 CARROLLTON, TEXAS – Oklahoma State golfer Leo Oyo shot a third-round 75 to finish alone in second place in the stroke play portion of the Maridoe Amateur Championship Wednesday at Maridoe Golf Club. He earned the second seed as the top 64 advance to match play Thursday, with the championship match scheduled Sunday.

Oyo, a transfer from San Diego State and native of Tokyo, Japan, finished three shots behind Will Holcomb who closed with a 3-under 69 to finish in first at 2-over. Oyo (70-76-75) finished at 5 over, a shot ahead of Luke Potter. He was awaiting his first round opponent to be determined after a playoff for the final spot in the field. Final stroke play results are here.

All four players competing for the Oklahoma Sooners have advanced to match play.

Jonathan Brightwell made nine birdies, the third-most in the field, to finish stroke play at 9-over and T11 on the leaderboard. The Oklahoma redshirt senior carded a field-low 69 (-3) on Tuesday and produced bookend rounds of 80 and 76 to finish as the top Sooner after 54 holes. The No. 11-seeded Brightwell will face Stanford freshman Karl Vilips, who is seeded 54th, in the round of 64 on Thursday.

Logan McAllister and Garett Reband both finished stroke play at 11-over but did so in different ways.

McAllister opened his tournament on Monday with an 80 and followed it with a 76 on Tuesday, but he fired a 71 on Wednesday to grab a share of 17th. The OU junior had a breakout fall for the Sooners, claiming medalist honors at the Big 12 Colonial Preview and a pair of top-20 finishes at the Maridoe Collegiate and East Lake Cup to finish the fall ranked ninth in the nation. McAllister, the No. 17 seed, will take on No. 48 Maxwell Ford, a junior player from Georgia, in the round of 64.

Reband shot rounds of 76-76-75 (227, +11) to tie McAllister for 17th. The All-American had the fifth-fewest birdies in the field entering Wednesday’s round as the York, S.C., product continued to show why he is the No. 6 player in the latest PGA Tour U rankings. Reband is the No. 20 seed after tiebreakers and will face No. 45 Benjamin Shipp from North Carolina State on Thursday.

The final Sooner competing was East Lake Cup winner Patrick Welch. The junior opened with a 79 on Monday but steadied his game on Tuesday and Wednesday by carding a pair of 76s to finish T37. Welch will square off with OSU’s Stark who is the No. 25 seed in the round of 64.

Also making the match play field was Mason Overstreet of Kingfisher and the University of Arkansas. Overstreet tied for 34th at 14 over after rounds of 79-74-77. He will play Matthew McCarty in the opening round.

Live scoring for match play can be found on the tournament’s website. Golfers will play one match daily until a champion is crowned on Sunday.