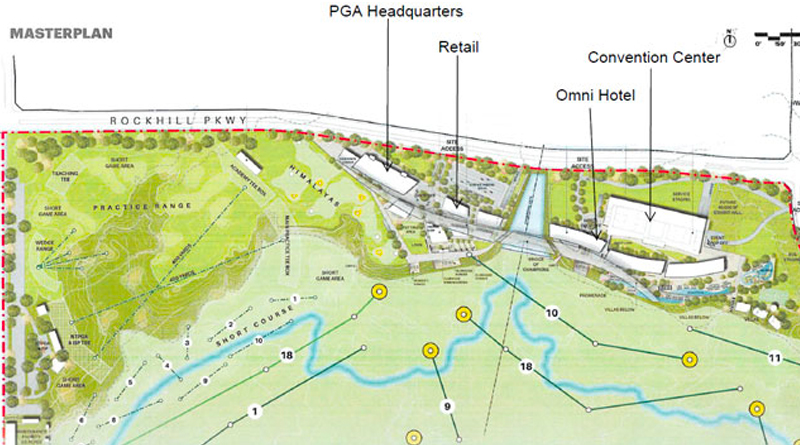 ORLANDO – PGA of America CEO Seth Waugh unveiled plans Wednesday for the expansive golf facility at the new PGA headquarters in Frisco, Texas, just north of Dallas, which he said will dramatically alter the landscape for golf travel in Texas-Oklahoma, the Midwestern region and all over the nation.

After years of discussion and debate, the national golf body voted last fall to end a 60-year plus headquarters location in South Florida. Wednesday’s interview was the most detailed plans for a massive new golf development which will be fully public and open to all.

“We believe in golf for everybody and we want this facility to be open to local golfers, those in the region and anyone who can be inspired to play on these fun and championship courses,” said Waugh, who became the new PGA of America CEO last August, just months before the final vote to move to North Texas. Waugh spoke at a press conference at the annual PGA Merchandise Show in Orlando.

Gil Hanse, who is currently doing renovation work at Southern Hills in Tulsa, will design the Championship Course at the new, still unnamed PGA facility in Frisco, in far North Texas, just about an hour’s driving time from the Oklahoma border.

Beau Welling, who worked with Tiger Woods to design the private Bluejack National facility outside of Houston, will design a second golf course at the facility, along with a par 3 facility. Waugh said a huge putting green and practice facility will be part of the public golf resort along with a possible future Golf Hall of Fame.

Omni Hotels is building a 500-room upscale Resort Hotel, and will also join with Dallas-based Stillwater Capital to build and help operate the golf courses.

“We really want this to be a park for all golfers to come and enjoy. If you go to St. Andrews (Scotland) you see townspeople and visitors from all over just coming to enjoy the grounds, get some exercise, maybe walk the dog and enjoy some golf,” said Waugh.

While the PGA has pledged to bring 23 championship events over 13 years, including two PGA Championships and a future Ryder Cup, Waugh pledged the facility would be open and accessible for all golfers a vast majority of the time, with the emphasis on fun and friendship

“Nobody cares what you shoot, why should you?” he said.

Waugh has been an international banking executive for much of his business career, which led to being involved in the Boston PGA Tour event before coming to the PGA of America. He credited the Texas can-do entpernuial spirit for making the massive project possible

“Texas has always been known as business friendly and the Frisco economic package was a great deal ($500 million in tax rebates and economic stimulus). They really knocked it out of the park on that, but what they really gave us was 600 acres of raw clay to mold the headquarters and the golf facilities the way we needed it.

“We have some great partners in Omni and Stillwater Capital and Jonas Woods and they are really betting on us to get it right and make a difference for golf in North Texas and beyond. Did we love leaving Florida? No we didn’t, but Frisco gave us a once in a lifetime opportunity.”

While South Texas is dominated by several hugely popular public resorts, North Texas has only the TPC Four Seasons Resort in Las Colinas, the former site of the PGA Tour’s Byron Nelson Championship on a scale and scope of the new PGA plans.

Along with 36 holes of public golf, a short course, putting green and massive practice facility, Waugh said the organization would have a huge retail option there, the PGA of America Hall of Fame, which was shut down in Florida, all with possible homesite and commercial development.

“It will be huge community for golf, a hub for golf where none existed before. Like a Silicon Valley for golf. We are truly taking a build it and they will come mentality.”

With the rising golf destination Johnny Morris is building near Branson, golfers in both Tulsa and Oklahoma City will be located within three hours of one of the nation’s top golf destinations in the near future.

No news on PGA Championship at Southern Hills

The PGA of America had no news to announce regarding whether the PGA Championship at Southern Hills will be held in 2025 or 2030, the only open dates remaining in the window in which the organization promised to hold its fifth PGA Championship at the south Tulsa venue. Speculation is that the 2025 event will go to Quail Hollow in Charlotte and 2030 to Southern Hills, but it has not been announced officially.