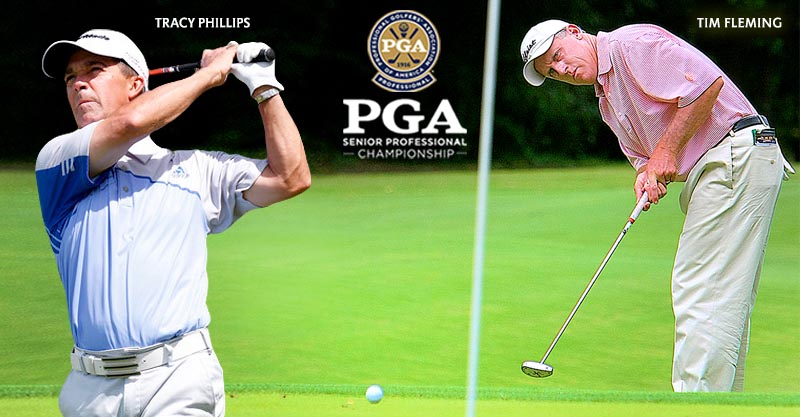 Tracy Phillips of Tulsa and Tim Fleming of Oklahoma City have both qualified for the 2022 Kitchenaid Senior PGA Championship with top-15 finishes Sunday in the 2021 Senior PGA Professional Championship Sunday at PGA Golf Club in Port St. Lucie, Fla.

Phillps shot a final-round 3-under 69 to finish tied for 12th while Fleming ripped off a 6-under 66 to move into a tie for 14th. The low 35 finishes qualify for the 2022 Senior PGA May 26-29 at Harbor Shores Golf Club in Benton Harbor, Mich.

It will be the third major championship for Phillips, 58, who also qualified for this event in 2014 and 2015. He made the cut in 2014, which was also at Harbor Shores. Fleming, 56, has now qualified four times in five attempts, but this will be his third PGA Senior Championship as the tournament was not held in 2020.

“It means a lot every time you make it,” Phillips said. “I hit it well this week. The Bermuda greens gave me a lot of trouble in reading breaks and with the speed and I think I let a few shots get away each day, but for the most part I played some solid golf.”

Fleming, the Director of Golf at Oklahoma City Golf & Country Club, began the tournament with three consecutive rounds of  72 during which he had five birdies and an eagle combined. He was at 1-over as one of the two courses used the first two days is a par-71. Finding a clue on the range Saturday night by keeping his head more level, he made six birdies and an eagle in his Sunday round alone.

“I hit my irons terrible all week but figured some stuff out late yesterday and hit it much better,” Fleming said. “I still had two three-putts in the final round but I generally hit it a lot closer. I was leaving myself 30 and 40-footers the first few days. I didn’t make any major mistakes, but the answer to shooting low is to hit it a lot closer and I was able to do that.

“I’m probably more proud of managing my game the first three rounds when I wasn’t swinging well. I sent some videos to my instructor and looked at it again myself because I was hitting a lot of fat and thin shots. I just needed to stay level and keep my head from moving up or down.”

“I’m tickled,” Fleming said, “I work hard on maintaining my fitness and flexibility, but you never know as you get older how long you’ll be able to do this. I kept fighting and clawing this week, and then it turned around.”

Jim Young, the Director of Instruction at Gailladia Country Club in Oklahoma City, also competed but did not make the 36-hole cut.