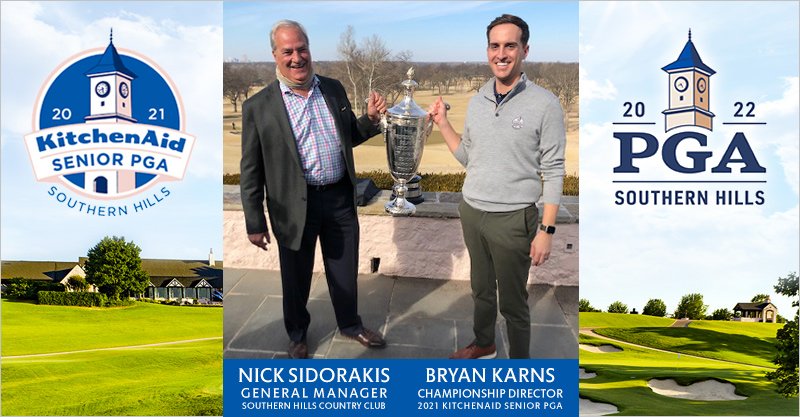 Preparations for a pandemic-limited senior championship are one thing. Getting a course, city, region and state ready for one of the world’s four major golf championships is a different level of preparedness – and a level of opportunity – that extends far beyond the golf course.

The2021 Kitchenaid Senior PGA Championship coming up May 27-30, with attendance still uncertain due to Covid-19 restrictions, will have a positive economic impact on Tulsa and the community estimated at approximately $24.7 million. The 2022 PGA Championship, with restrictions hopefully in the rear view mirror, could bring in over $143 million to Tulsa and the surrounding area. Hoyt broke that figure down as $18 million for hotels and lodging, $12 million in transportation (flights, taxis, Uber, Lfyt, etc), $14 million for food and beverage (a great shot in the arm for hard-hit local restaurants) $14.3 million for retail and 19.7 million for recreation. A total visitor spend of $78.8 million including a direct sales tax boost of $3.6 million for the city of Tulsa. The direct economic spend overall including local residents is expected to be $82 million with an indirect spend of $61 million as dollars are recycled throughout the community for the total of $143 million.

“The Senior PGA and PGA Championships are a tremendous gateway that allows us to showcase Oklahoma to the rest of the world,” said Oklahoma’s Lt. Gov. Matt Pinnell. “We encourage visitors to join us for the tournaments, but stay for the entire package. We are home to the Nation’s number one city park, beautiful lakes and shoreline, world-renowned museums, Native American culture, Route 66 hot spots, historic Art Deco architecture and a phenomenal live music scene. We offer something for everyone, including Oklahoma’s famous hospitality.”

Those dollar figures are hugely important, but how can Tulsa best show itself off to the thousands of visitors – including decision makers at businesses small and large – that will be visiting, looking for a week of fun and entertainment and in some cases checking out what Tulsa has to offer as a potential future site for a home or business relocation. Future benefits if businesses and individuals are impressed enough to move to a city hosting its eighth major championship are incalculable.

How rare is it for Southern Hills to host eight major championships (just counting the U.S. Open and PGA Championship)? Outside of Augusta, Ga., and the Masters each spring, or British Open venues, Southern Hills will be trailing only Oakmont (12 majors), Baltusrol and Oakland Hills (9 each). Winged Foot is right behind with seven. This is rarified air.

Southern Hills will do its part to keep that tradition going. For the city, the best way to take full advantage is to highlight exactly what Tulsa strives to be, a mid-size, friendly community that is easy to get around and offers a wide variety of cultural events, authentic music, a thriving downtown scene and a smorgasbord of sporting activities with a focus on the outdoors, including tennis, golf, pickleball, skating, biking, running, walking, soccer, softball and more. The Gathering Place will certainly be a huge draw. In short, present Tulsa as a cool place to live and work.

To do that, Hoyt said the chamber, the city and other interested organizations would begin planning immediately on how the city can put its best foot forward. The city will also be hosting thousands of visitors that weekend for the Ironman North American Championships, which includes some forced closures of Riverside Drive for the triathlon activities.

Hoyt said that makes it imperative that other major arterials are open and clear of street projects in both south Tulsa and the downtown area. Hopefully city budgets strapped by the pandemic will allow for the sprucing up of right of ways and other cosmetic projects.

While the sport of golf is bringing millions to the city and the community, Hoyt conceded that a potential hit to the community’s reputation that week could come from the deteriorating condition of its Page Belcher municipal courses, which are likely to be jammed with visitors that week, as will other areas public courses such as LaFortune Park, South Lakes, Forest Ridge, Bailey Ranch, Battle Creek, Canyons at Blackjack Ridge, Rock Creek, Heritage Hills and the city’s Mohawk Park. Private courses will be overflowing with guests as well. Will the city’s long-term neglect of its golf courses raise questions about its commitment to its own facilities in other areas?

“It’s something we need to focus on,” Hoyt said. “The economy is very tough and the city isn’t collecting the sales taxes it did in the past. Hopefully we can get a public-private partnership so we can restore that golf course. Investing in public facilities, particularly outdoor venues, is more important than it ever has been before. People need outdoor gathering places, whether it’s Turkey Mountain (hiking and biking trails) or golf courses. The physical activity is important but even more important is the mental aspect. When you are healthy and exercising, you can deal much more easily with what we’ve all had to deal with the past year.”

As for the pandemic and this year’s senior event, the PGA of America has not yet finalized attendance capacity or safety protocols, as leaders are working closely with local health officials to prepare a plan compliant with current health requirements for large events.

“In May, our KitchenAid Senior PGA Championship kicks off an unrivaled 12-month period for golf, not only in Oklahoma but anywhere,” said Karns. “Tulsa is well known for its affinity for golf and is one of the few markets capable of holding two major championships of this scope and stature in such a short time. I want to thank the City of Tulsa and Tulsa County Health Department, both of whom have been tremendous partners in helping us devise a plan for the Championship. We’re working on a conservative, yet flexible plan that would allow for increased numbers if local health conditions warrant as we approach Championship Week in May.”

Those interested in attending the 2021 KitchenAid Senior PGA Championship may purchase the limited tickets currently available at SrPGA.com. Registering for Senior PGA tournament tickets automatically enters attendees for priority consideration to purchase tickets to the 2022 PGA Championship, which will be played at Southern Hills from May 16-22, 2022. Those interested in securing 2022 PGA Championship tickets may register online at PGAChampionship.com/2022/tickets and will receive a notification when tickets become available in June. Tickets are only available to pre-registered individuals and purchasing windows are assigned based on registration date. Registration is free and there is no obligation to purchase.