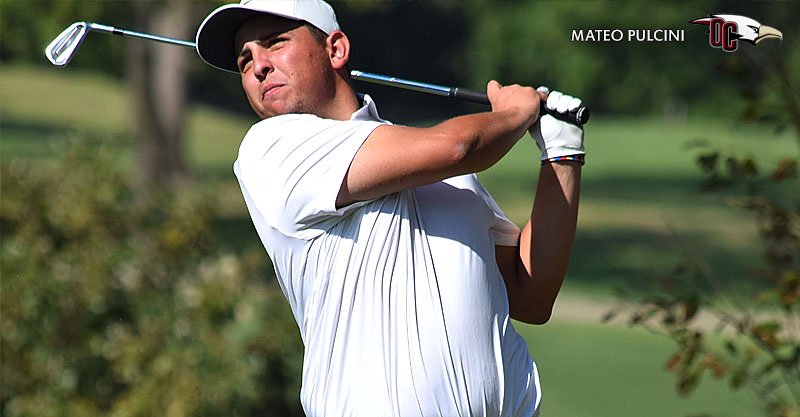 MONKEY ISLAND, Okla. (Sept. 28, 2021) – No. 14-ranked Oklahoma Christian entered the final round of the Missouri Southern Fall Invitational on Tuesday thinking it was playing for second place, and sophomore Mateo Pulcini figured he’d be shooting for a top-10 individual finish.

Such thoughts made sense, as OC trailed defending national junior-college champion Hutchinson (Kan.) by a whopping 15 shots and Pulcini was five shots out of the lead, in 16th place. But Pulcini matched his career-best round to lead a pulsating OC comeback and both he and the Eagles ended the day, and the tournament, tied atop the leaderboard. Coach David Lynn called it an “unbelievable” start to the men’s golf season and quite possibly the greatest final-day comeback in program history.

With a team round of 281, the Eagles made up all that ground on Hutchinson to close at 864 overall, good for the 74th win in OC program history and the third straight in the Missouri Southern event. OC won in 2018 and 2019 before the 2020 tournament was cancelled due to the COVID-19 pandemic. Rogers State placed third, Northeastern State sixth, Southeast Oklahoma State 16th and Southern Nazarene 17.

Pulcini, from Rio Cuarto, Argentina, was the 2021 Lone Star Conference freshman of the year and also earned honorable mention on the Golf Coaches Association of America’s NCAA Division II All-America list. It seemed a given he’d someday win a tournament, but after shooting a pair of 1-over-par 73s on Monday on the 6,876-yard Shangri-La layout, it looked like that win wouldn’t come this week.

But Pulcini laid down a bogey-free 5-under 67 to keep edging up the leaderboard. He birdied his final two holes, the par-5 No. 18 and the par-4 No. 1, to match the best score of his collegiate career. Then he waited for Hutchinson’s Harry Crockett to finish. Crockett, who eagled two other par-5s at Shangri-La on Tuesday, parred No. 18 to close out an even-par 72 and finish at 3-under 213 – the same as Pulcini. No playoff was held, as Pulcini and Crockett shared medalist honors.

Pulcini became the 23rd player in OC history to win at least one collegiate tournament. He’s one of three players on OC’s current roster with at least one win, joining senior Andres Brictson (who has five) and junior Alejandro Armijo (who has one, when he played for Oregon Tech).

Hutchinson, which trailed OC by two shots entering the final hole for each team, did manage to close that gap and tie the Eagles. No playoff was held for the team title, either, between the Eagles and Blue Dragons. Both finished 14 shots ahead of Rogers State (which began the day tied with OC) and Henderson State (Ark.), which tied for third.

For a time, it appeared Armijo might join Pulcini in celebrating a win, but a double bogey on No. 18 knocked Armijo out of a tie for the lead in the 100-man field into a tie for fourth at 215 (1-under). His 73 on Tuesday included five birdies. It was his sixth top-10 finish for OC and his highest finish as an Eagle.

OC freshman Exequiel Rodriguez of Buenos Aires, Argentina, posted a top-10 finish in his first collegiate tournament, tying for ninth at 217 after shooting an even-par 72 (with three birdies) in the final round.

Brictson, from Merida, Mexico, had only one bogey and four birdies while shooting a final-round 69 that put him in a tie for 14th at 219. Sophomore Chase Gardner of Snohomish, Wash., also moved up the standings, recording four birdies en route to a 74. He tied for 82nd at 237.

OC’s next tournament will be the NCAA Division II Regional Preview, set for Oct. 4-5 at Pueblo Country Club in Pueblo, Colo.

Rogers State was led by freshman Daniel Robles who tied for 14th after shooting 219 after three consecutive rounds of 73. He finished the tournament with 13 birdies and an eagle.

NSU was led by Ryan Morant,  who finished one stroke back of the medalist lead and was third place overall, carding a 214 (68-75-71). The finish is Morant’s best at Northeastern State, and he had an opportunity to tie for medalist with an eagle put on the last hole.  He finished the three-round tournament with 13 birdies and 31 pars.

“Ryan showed a ton of guts and poise this week,” said head coach Scott Varner.  “He is an entirely different player than he was a year ago and a huge bright spot for us so far this fall.  We have had two tournaments in a tow where we have had a player come within a shot of winning.”