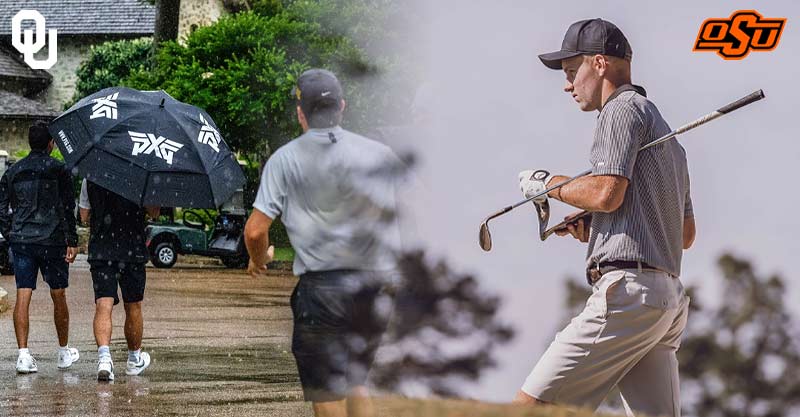 TRINITY, Texas – Round one of the Big 12 Championship was suspended Monday due to weather in the area. As a result, the Championship has been reduced to a 54-hole format.

The top-ranked Sooners (T4, -1) played the front nine of the first round on Monday at Whispering Pines Golf Club before the rain started. Oklahoma is one shot back of second place and four back of leader No. 5 Texas Tech (-5).

Chris Gotterup (T3, -1) and Drew Goodman (T3, -1) led the way early for the Crimson and Cream, as the two share third. Goodman, a freshman from Norman, is thru 11 holes, while Gotterup was on the par-4 ninth hole when officials stopped play.

Patrick Welch birdied the 11th hole right before the horn sounded to get back to even-par. He’ll resume action Tuesday in a tie for 18th.

Logan McAllister (+1) used eight pars on the front to grab a share of 27th alongside teammate Stephen Campbell Jr. Both golfers are thru nine holes in the first round.

Play is scheduled resume at 8 a.m. Tuesday as teams conclude the first round of play, followed by round two teeing off at 11 a.m. Oklahoma, who entered the week as the nation’s consensus No. 1 team, will again be joined in the tee box by No. 2 Oklahoma State off the 10th tee for round two. Wednesday will play host to the Championship’s final round.

Live scoring for all rounds can be found on Golfstat.com.