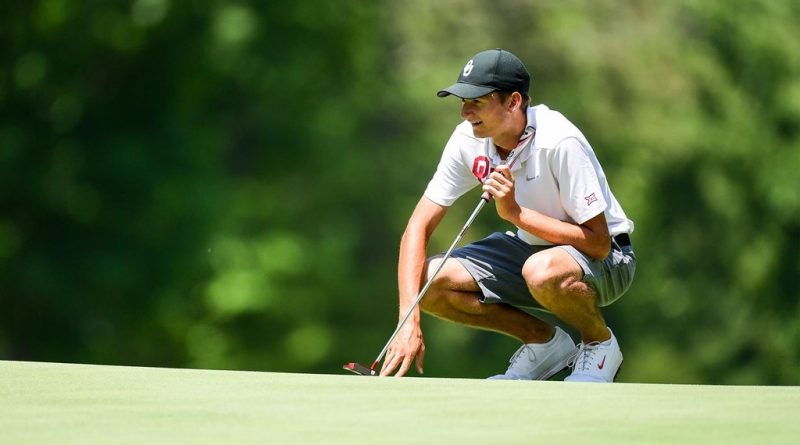 PEBBLE BEACH, Calif. – Garett Reband birdied six holes in succession on the front nine and shot a 7-under 65, leading the No. 7 Oklahoma Sooners to an 11-under total and the lead after the first round of The Carmel Cup. The three-day, 54-hole tournament is taking place Friday-Sunday at the historic par-72, 6,828-yard Pebble Beach Golf Links in Pebble Beach, Calif.

Oklahoma State, with one returnee in the lineup, was fifth after the first round at 5-over.

The Sooners carded a 349 during the opening round of action on Friday against a competitive eight-team field and head into Saturday’s second round three strokes ahead of Arkansas.

Reband birdied holes 2 through 7 and added another on 9, then offset two back-nine bogeys with two additional birdies and is in first place on the individual leaderboard through 18 holes.

“Great way to start the year,” OU head coach Ryan Hybl said. “Really fun to see both of our freshmen get their careers started out on the right foot. Garett (Reband) absolutely loves Pebble Beach and he had one of those special rounds today. The golf course played very tough coming down the stretch and our guys hung in there.”

Freshmen Turner Hosch and Jake Holbrook are tied for fifth place after the first 18 holes. The duo tallied scores of 69 (-3). Hosch finished his round strong, birdieing two of his last three holes.

Holbrook had a strong day in his first round as a Sooner. The fellow freshman went bogey-free and recorded three birdies in the opening round.

Senior Quade Cummins is tied for 11th after the first round, finishing with a one-under 71 during Friday’s first day of action. Sophomore Blake Lorenz carded a 75 (+3) and shares 27th place.

Senior Thomas Johnson recorded a 78 (+6) in the first round and is tied for 38th place.

OU tees off round two at The Carmel Cup on Saturday at 10 a.m. CT. OU is paired with Arkansas, Texas Tech and Georgia.

For Arkansas, Mason Overstreet of Kingfisher shot a 4-under 68 while Tyson Reeder of Edmond added a 73.

Oklahoma State opened with a 5-over total of 365 to stand alone in fifth place. The Cowboys finished the day a shot behind Georgia for fourth place at the par-72, 6,828-yard layout.

Ferdinand Müller posted an opening 69 to lead the Cowboy starting lineup and finish the day tied for fifth place. The senior went out in 3-under 33 after carding birdies at the second, third and sixth. Müller reeled off three consecutive birdies at Nos. 11-13 on his way to coming home in even-par 36.

Brian Stark, one of three freshmen in the starting lineup for the Cowboys this weekend, posted an even-par 72 to come in tied for 17th place.

Sophomore Aman Gupta carded a 2-over 74 to come in tied for 25th place.

Junior Austin Eckroat opened with a 75 to stand in a tie for 27th, while freshman Rayhan Thomas also turned in a 3-over score to finish among those tied for 27th place. Freshman Dillon Stewart’s 81 tied him for 45th place.

The Cowboys will begin their second round tomorrow morning at 7:00 a.m. (PST) and will be grouped with TCU, Vanderbilt and Mississippi State. Live scoring for the event is available at golfstat.com.