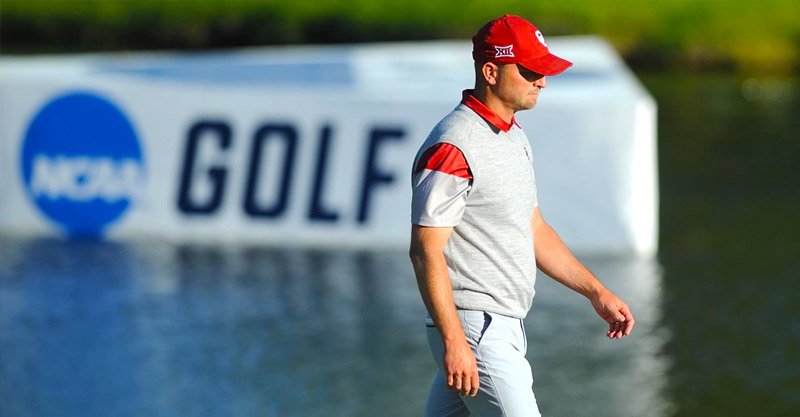 Four Oklahoma men’s golfers were named to the All-Big 12 team and head coach Ryan Hybl was named the conference’s coach of the year, it was announced by the league on Tuesday afternoon.

Seniors Quade Cummins and Jonathan Brightwell, alongside juniors Logan McAllister and Patrick Welch, all earned All-Big 12 honors for the first time in their careers.

The four OU players selected from the 11-man team are the most in program history and tied for the most on a single team in Big 12 history. The selections bring Oklahoma’s all-time All-Big 12 honors to 26, third-most in the conference.

Cummins concludes his career as one of the best golfers to ever come through Norman. He notched 22 top-10 finishes and 10 top fives over six seasons in the Crimson and Cream. The Weatherford, Okla., owns eight school records, including career scoring average (71.31) and rounds of par-or-better (88).

Brightwell excelled for Hybl’s team in his only season as a Sooner after transferring from UNC-Greensboro. His 71.28 scoring average in 2020-21 was the 11th best in the program annals, while his 23 rounds of par-or-better golf this season were the most on the team. This year, the 2020 second-team All-American had eight top-10 finishes in 12 tournaments to collect the fourth All-Conference honor of his career and first in the Big 12.

McAllister shined in the first season that he consistently appeared in the OU lineup, tallying a win and two runner-up finishes for the Sooners. The junior from Oklahoma City moved up the national rankings and into the top 20 after earning Big 12 Golfer of the Month honors in September 2020. McAllister used two aces at the NCAA Championship to earn a 17th-place finish at the national championship and finish the year ranked 26th.

Closing out the OU honors was junior Patrick Welch, who took home medalist honors at the prestigious East Lake Cup in the fall and was named a Ben Hogan semifinalist in the spring. Welch has garnered national attention for his cross-handed swing and owns the sixth-best scoring average (71.77) all-time for the Sooners.

For Hybl, the coach of the year accolade is his second since arriving in Norman in 2009, collecting the honor in 2018. Hybl led the Sooners to a consensus No. 1 national ranking and the third-lowest team scoring average in program history. The Sooners notched four team victories this year, second-most in a season at OU, and runner-up placements at the Big 12 and national championship.

Under the 12th-year head coach, the Sooners are the only team in the nation to advance to match play at the last five NCAA Championships and have appeared at the NCAA Championship for the last decade, the third-longest streak in the country.

Junior Austin Eckroat, sophomore Eugenio Chacarra and freshman Bo Jin were all named first-team all-league selections, while Chacarra was also tabbed as the league’s newcomer of the year.

A transfer from Wake Forest, Chacarra’s distinction adds to an impressive first season in Stillwater that saw him earn first-team All-America honors and finish the year ranked third by Golfstat and No. 9 in the Golfweek/Sagarin Ranking. The Madrid, Spain, native recorded a pair of runner-up finishes and was third on three occasions.

Named to the all-conference team for the second time in his career, Eckroat was also named an all-region pick this year as well. The Edmond, Okla., native had one runner-up showing this past season and finished in the top five on three other occasions.

Jin capped his freshman campaign with three consecutive runner-up finishes, placing second at the Big 12 Championship, NCAA Stillwater Regional and the NCAA Championship en route to his recognition. The Beijing, China native was named an all-region selection as well as a member of the GCAA’s All-Freshman Team.

Chacarra and Jin will represent the International side this week at the Palmer Cup at Rich Harvest Farms outside of Chicago, while Eckroat is making his professional debut this week at the Korn Ferry Tour’s BMW Charity Pro-Am.