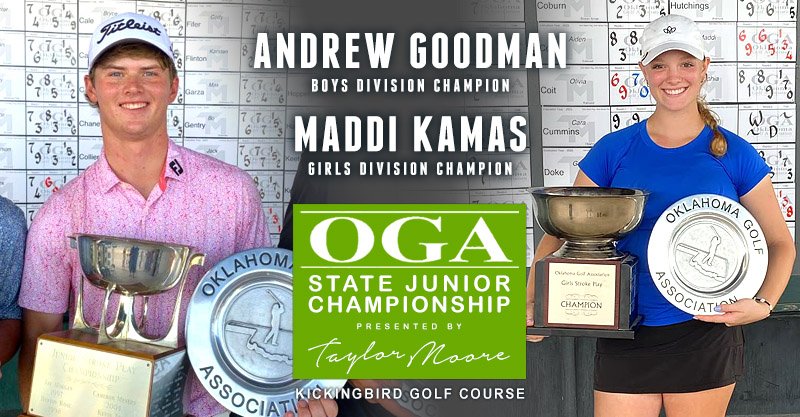 A year later and nothing has changed at the top of the leaderboard in the stroke play championship portion of the Oklahoma Golf Association Junior Championship presented by Taylor Moore.

Andrew Goodman of Norman and Maddi Kamas of Kingfisher are both champions for the second consecutive year. Goodman shot the same score – 9-under-par 131 – as he did a year ago, while Kamas was considerably better. Her second-round 5-under 65 led to a 6-under 134 total and a 4-shot victory over Raychel Nelke of Pocolo.

Goodman followed up an opening 67 Monday with a second-round 64 to hold off Class 6A state champion Ben Stoller of Owasso, who fired a 7-under 63 after opening with an even-par 70 to finish two shots back, and Tres Hill of Elk City, who shot 69-64 to also finish at 7-under.

Fourth place went to Jake Hopper of Norman, who finished at 4-under. Mesa Falluer of Muskogee finished at 2-under, while coming in at 1-under were Ryder Cowan of Edmond and Kyle McLaughllin of Oklahoma City.

The top 16 in three divisions (boys 14-15, 16-18 and girls) now move into match play beginning Wednesday. The semifinals and finals are Thursday.