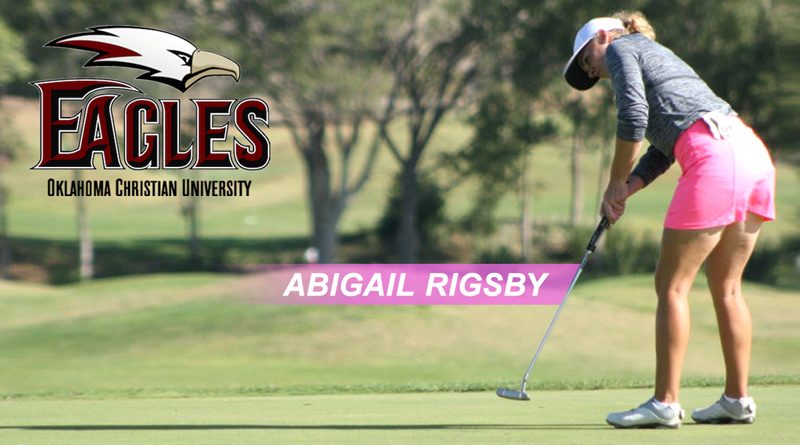 Photo: Abigail Rigsby is in the top 10 after the first round of the power-packed West Texas Desert Invitational.

Playing on a course that rewards precise shotmaking, Rigsby had three birdies en route to a 2-over-par 74 in the opening round, putting her in seventh in the 85-woman field, five shots behind the leader, Helen Kreuzer of Lynn (Fla.). Kruezer was three shots ahead of four players who shot 72.

No. 18-ranked OC – competing with only four players – stood fifth as a team in a loaded tournament that includes seven squads who are in the current Women’s Golf Coaches Association NCAA Division II top 25.

No. 7-ranked California State-San Marcos posted a 295 score to lead the 17-team field, five shots ahead of No. 11 Grand Valley State (Mich.), whose assistant coach, Axel Ochoa, is a former OC All-America player. In third place at 305 was No. 8 Lynn, with No. 5 West Texas A&M and OC tied for fourth at 306.

Rigsby, a junior from Courtenay, British Columbia, was four over after her first nine holes – the back nine of the 5,978-yard course – but rallied for a pair of birdies to go with seven pars over the final half of her round. She is coming off a win in the Mustang Intercollegiate, which was played Friday and Saturday at Palm Valley Golf Club in nearby Goodyear.

OC senior Kate Goodwin of Tulsa opened with a birdie at No. 9 and played a steady round, with one more birdie to go with five bogeys while shooting 75, putting her in a tie for 11th. Sophomore Shaley Goad of Wheeler, Texas, shot a 78 that included three birdies and left her tied for 25th, while senior Elizabeth Freeman of Edmond shot 79, recording two birdies.

The final round will begin at 10 a.m. Central time on Tuesday. The Eagles will be grouped with Colorado Mesa, No. 15 St. Mary’s (Texas) and Colorado-Colorado Springs.