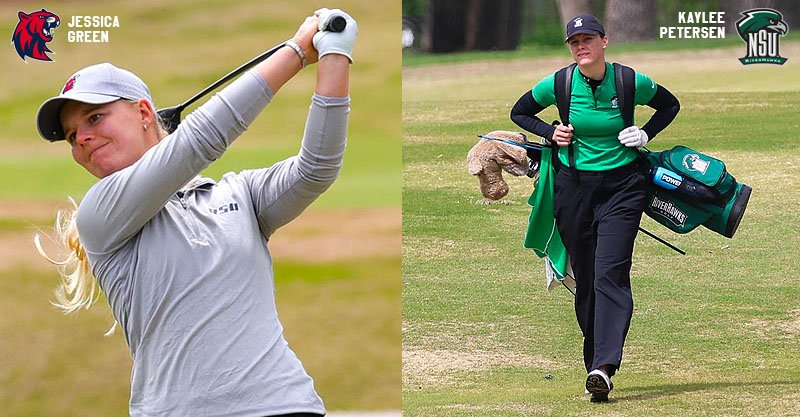 Northeastern State rallied to take the third and final spot in the 54-hole event at St. Joseph Country Club in St. Joseph, Mo. Arkansas Tech won at 919, five shots ahead of RSU and 17 clear of NSU.

Green followed up her opening 65 with rounds of 67-74 to take first, while Marelda Ayal added a fifth-place finish at 228 after a closng 75.

The RiverHawks at one point in the round were 14 strokes back of the cutline; they rallied and shot 2-under on the final four holes. Henderson State, who started the day in second, faltered on the back nine. Final hole birdies by Hernandez and  Hang provided the margin to advance.

“There are not enough adjectives to describe how proud I am of the guts, grit, and tenacity we showed in rallying from sixth to the necessary third with five holes to play,” said head coach Scott Varner.  “With six holes left, most had written us off. We disciplined our emotions and got determined. The way we competed those last five holes is the team we know we can be.”

Complete scores are below.

The Division II National Championship is May 11-15 at TPC Michigan in Detroit.