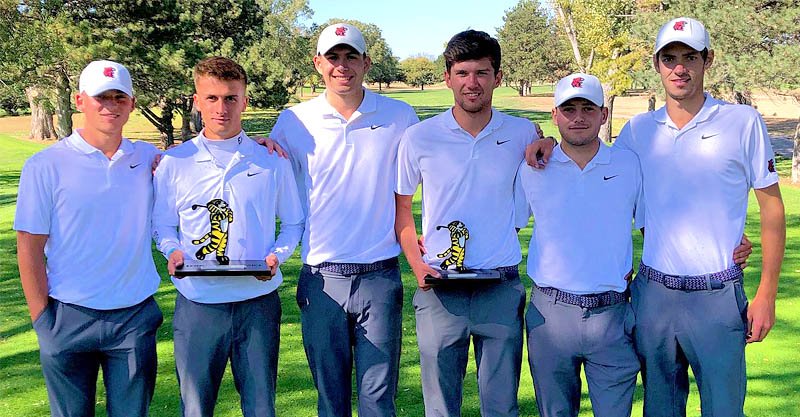 HAYS, Kan. – Led by Luke Palmowski’s final round 3-under 67, Rogers State came from behind to win the Fort Hays Sate University Tiger Classic by a single shot over Central Missouri Tuesday.

Central Oklahoma, which led after two rounds, dropped back to third with a score of 294 Tuesday to RSU’s 278. UCO finished at 876, 10 shots behind Rogers State. Northeastern State University tied for fourth at 888 after a third-round 294. UCO’s Kyle Hickey won the individual title at 3-over 213 after rounds of 71-73-69.

With six birdies and an eagle in the final round, Palmowski finished second on the par 70, 6,105-yard Smoky Hill Country Club with rounds of 70-77-67, just a shot behind Hickey.

The Hillcats will be back in action on Monday, Oct. 25 as they return home to host The Tulsa Cup at The Club at Indian Springs in Broken Arrow, Okla.

Besides Hickey, UCO’s Caleb Kimmel finished tied for 20th despite a final round of 80. Evan Griffith shot 76 and tied for 25th with teammate Liam Coughlin, who closed with a 72. Bennett Baldwin shot 77 and tied for 40th.

For NSU,  Brett Wilcoxen carded an even-par 70 for the best final round and tied for 25th. Gabe Replogle and Dominic Stevens paced the RiverHawks with 222 scores and were tied for 16th place.  Stevens turned in a 72 Tuesday and moved up six spots on the leaderboard.  Replogle entered the day as the tournament leader and slipped down after shooting an 80.