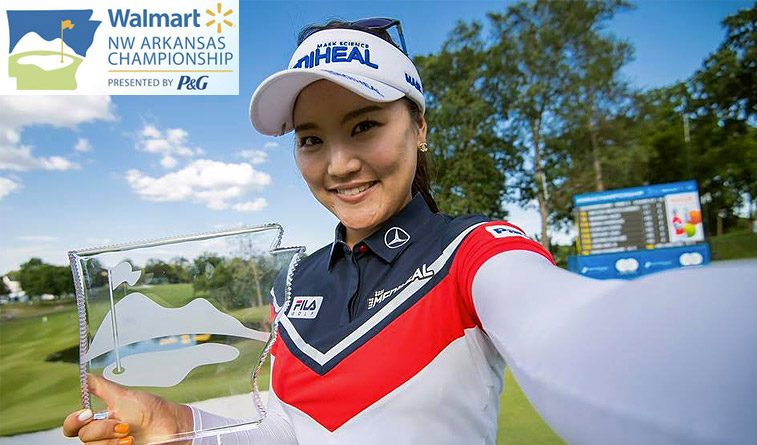 So Yeon Ryu is as resilient as she is consistent.

Sunday, the world’s third ranked player captured her fifth career win on the LPGA Tour at the Walmart NW Arkansas Championship presented by P&G. With her victory, Ryu ascends to No. 1 in the Rolex Rankings for the first time in her career.

“Dreams come true! I always dreamed about it. I cannot believe it. I didn’t expect two good things coming together,” Ryu said reacting to the news. “First of all, I really want to appreciate everyone who has been supportive of me, to make me the No. 1 player in the world. That’s finally made my dream. This is going to my first week as the No. 1 player in the world. I know it’s going to be a lot of pressure and I know I can handle a lot of different things.”

Ryu’s victory made a statement as she put on a record-setting performance in Arkansas. She set the new Tournament record with a 10-under par, 61 on Saturday, which resulted in a new 36-hole record at 16-under par. Ryu posted a final round 69 to finish the week at 18-under par, which sets a new Tournament record previously set in 2016 by Lydia Ko who finished at 17-under par. Ryu, who won the ANA Inspiration in April for her second major victory, becomes the first two-time winner of 2017 with her victory in Arkansas.

“I’m glad to be a multiple winner, and also this is not the first time I’ve won more than once in a year, so hopefully many more to come,” Ryu said after her round.

Ryu is one of the most consistent players week in and week out on the LPGA Tour.  Between October 2016 and May 2017, Ryu never finished outside the top-10. At the end of May, Ryu finished tied for 56th at the LPGA Volvik LPGA Championship and missed the cut the following week at the ShopRite LPGA Classic, her first missed cut since 2014. But she refused to let those last two starts define her. Instead, Ryu took two weeks away from the Tour working on her game and bounced back with a record-setting performance that earned her a victory on Sunday.

“One of the reason why I think I can be consistent is because I enjoy this game. I just want to be focused, enjoy this game and then try to improve every moment,” Ryu said. “Then, I want to see what God going to give me.”

Ryu held an eight-stroke lead on Saturday after posting a bogey-free, 61. In the afternoon, Stacy Lewis and Moriya Jutanugarn made a move up the leaderboard and into a tie for second, cutting Ryu’s lead to five. But it was Amy Yang, starting her day 7-strokes back of the lead, who made a Sunday charge. After the turn, Yang drained back-to-back birdies to pull within two strokes of Ryu who made her first birdie of the week at the par three, 11th. But the situation was reversed on the very next hole where Ryu made birdie and Yang a bogey to give Ryu a comfortable four-stroke lead heading down the final stretch. Yang finished tied for second at 16-under par.

“I didn’t look at the leaderboard much because I wanted to focus on my game instead of comparing to anyone,” Ryu said about Yang’s Sunday charge. “At the same time I try hard to comparing not to my first two rounds, because my first two rounds was just phenomenal and compared to today feels like I hit like 80, which it’s not but it feels like that. And I kept talking to myself, ‘okay, So Yeon, don’t try to be perfect, don’t compare to any first two tournaments, just focus on the ball.’”