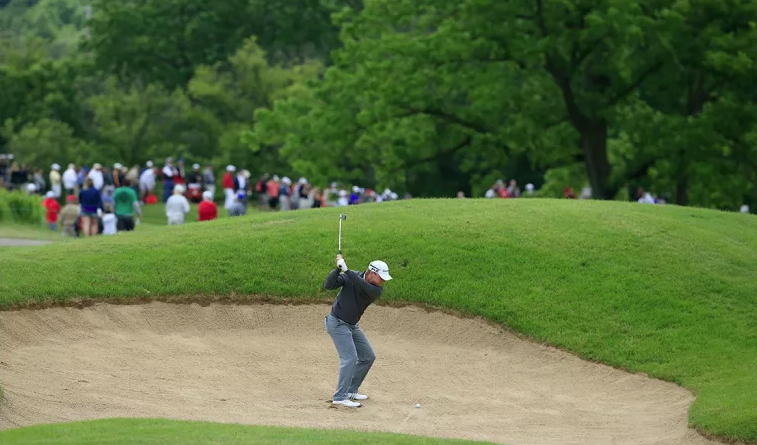 Scott Verplank hits his second shot on the second hole during the third and final round of the American Family Insurance Championship held at University Ridge Golf Course on June 25, 2017 in Madison, Wisconsin. (Photo by Michael Cohen/Getty Images)

It was a week of coming close for Oklahomans in professional golf.

Scott Verplank finished two strokes behind Fred Couples in second place in the American Family Insurance Championship in Madison, Wis. After initial reluctance to join the senior circuit and then limited success, Verplank is hitting his stride. Since missing the cut at the KitchenAid Senior PGA Championship, Verplank has recorded consecutive top-five finishes. Last week, he finished T5 at the Principal Charity Classic, and this week’s second-place finish is his best finish in 43 starts on PGA TOUR Champions.

Verplank led the field in putting this week (1.605 putts per GIR) and putts per round (26.67). In the season, he is second on Tour in putting (1.679). In the season, he has three top-10s and is now 26th in the Schwab Cup standings. Verplank is hosting his charity event at Oak Tree National today. The event provides scholarships for young athletes who, like Verplank are affected by Type I diabetes.

While one of the senior Oak Tree Gang members was nearly recording a victory, one of the leaders of the young guns who call Oak Tree National home made it to a playoff in the Lincoln Land Charity Classic on the Web.com Tour. Will Kropp shot 14-under par and finished in a tie with Adam Schenk, Eric Axley and Kyle Thompson. Schenk won the playoff with a birdie putt on the second playoff hole.

Kropp, who played his high school golf at Edmond North, had a wild final round that included two eagles, five birdies and five bogeys and only six pars. He birdied the 18th hole to get in a playoff. Kropp got into the event on a sponsor’s exemption, and had earned just $3,111 in four previous starts on the tour. The tie for second will grant him status for the rest of the Web.com Tour season after the next reshuffle in two weeks and he’ll have an opportunity to earn one of the PGA Tour cards that go to the top 25 finishers.

“I knew I had to play well,” Kropp said. “I was ready and performed and rode the wave out. I wish it would have ended a little better, but now I have status and this is huge for me. That was my goal and now I’m ready to move on to the next one.”

Kropp eagled the third hole from 150 yards out and his second eagle came on a chip-in on a par-5. He said he couldn’t remember ever having a round of 4-under that included five bogeys.

“It was really windy and they had tucked the pins,” he said. “You could just be a little bit of and you were scrambling for par. I held it together and came back each time I had a mistake.”

“There’s a bunch of other guys at Oak Tree that are right on the cusp of getting out here,” Kropp said. “And there’s a couple of guys from OU that are planning to come over. We all know what the Oak Tree Gang accomplished, we hope this is the start of a new gang and that we make our mark. Within four years of each other there’s a lot of great golfers from Oklahoma and I think you’re going to see a good wave of Oklahoma players making an impact in professional golf.”

Stark birdied two his his final four holes to win the Made in Denmark Challenge at Royal Oak Golf Club.

The 28-year-old Stark vaulted him into seventh place on the tour’s money list, important because the top 15 players at season’s end will earn full playing privileges on the European Tour for 2018.

Stark was on the leaderboard all weekend, opening with a 6-under-par 66 and following that with rounds of 67 and 72 before recording a 69 on Sunday. He finished at 14-under-par 274, two shots better than the trio of Adrien Saddier of France, Dominic Foos of Germany and Victor Perez of France.

“It feels amazing to be a Challenge Tour winner, it’s pretty surreal – I don’t really understand it yet but I guess on the ferry home I might,” Stark said. “This is big for my season. I’m into the Rolex Trophy now and it now means I will focus on the Challenge Tour, because I played a few European Tour events at the beginning of the year.”

Stark, from Gothenburg, Sweden, was a four-time NAIA All-America selection from 2008 to 2011 at OC, receiving first-team honors the final three years. He was a part of teams that won the NAIA title in 2009 and 2011 and as a senior in 2011, he received the Arnold Palmer and Nicklaus Awards after earning individual medalist honors at the NAIA Championship.