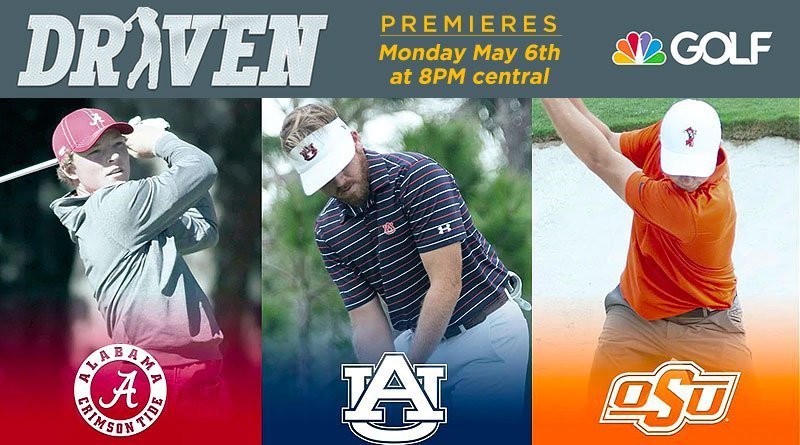 ORLANDO, Fla., May 1, 2019 – NBC Sports is teaming up with PGA TOUR winners Rickie Fowler and Justin Thomas to give viewers a behind-the-scenes look at three of the country’s top college golf programs – Alabama, Auburn and Oklahoma State – on the second season of Driven, premiering on GOLF Channel Monday, May 6 at 9 p.m. ET. GOLF Channel also will premiere a new series, College Golf 101, immediately following Driven at 9:30 p.m. ET, expanding the network’s May college golf programming heading into the 2019 NCAA Golf National Championships.

Driven is a four-part documentary series that will follow the 2018-19 college golf seasons and the competitive journeys of Alabama’s men’s golf team and their “Iron Bowl” rivalry with Auburn as they look to return to the NCAA Golf Championships. The series also will follow reigning NCAA national champions Oklahoma State as they look to defend their 2018 title.

“It has been a lot of fun partnering with Justin for season two of Driven, highlighting the Alabama-Auburn rivalry within the world of college golf and my alma mater as we look to defend our national championship,” said Fowler. “We have been bouncing ideas off each other throughout the year, and we’re excited for viewers to see the game’s future stars and their dedication to college golf. Go Pokes!”

“Working with Rickie on Driven to showcase Alabama’s golf program and its rivalry with Auburn has reminded me why college sports are so great and how much fun I had playing golf for Alabama,” said Thomas. “Rickie and I have such a passion for college golf and our alma maters and we look forward to seeing this passion come to life with Driven. Roll Tide!”

Alabama, currently the No. 21 ranked team in the country according to GolfStat, finished runner-up at the 2018 NCAA Championships, falling to Oklahoma State in the championship match. Auburn, currently the 16th-ranked team in the GolfStat rankings, advanced to the semifinals at the 2018 NCAA Championships before falling to Oklahoma State. Monday’s premiere episode of Driven will focus on the 2018 fall golf season, culminating with the East Lake Cup in early November, the final event of the fall season for all three programs, where Auburn defeated Alabama in the championship match.

Leading up to GOLF Channel’s coverage of the 2019 NCAA Men’s Golf Championships, Driven is scheduled to air on three consecutive Mondays starting May 6 on GOLF Channel, with the final installment premiering on NBC following the championships. Driven will feature exclusive footage from production crews embedded with Alabama, Auburn and Oklahoma State’s men’s golf programs over the course of the 2018-19 season, culminating in Fayetteville, Ark., with the University of Arkansas hosting the NCAA Men’s Golf Championships at the Blessings Golf Club from May 24-29. Golf Channel will air live coverage of the championships Monday-Wednesday, May 27-29.

NEW GOLF CHANNEL SERIES COLLEGE GOLF 101: Complementing GOLF Channel’s upcoming NCAA Championships coverage will be College Golf 101, a new three-part series that will air immediately following the first three episodes of Driven Mondays at 9:30 p.m. ET, breaking down the best of the best when it comes to college golf. Hosted by Chantel McCabe, College Golf 101 will count down the top-10 most dominant college players (May 6); top college teams (May 13) and elite college programs of all-time (May 20), featuring interviews and insight from major champions and a wide range of college golf experts.