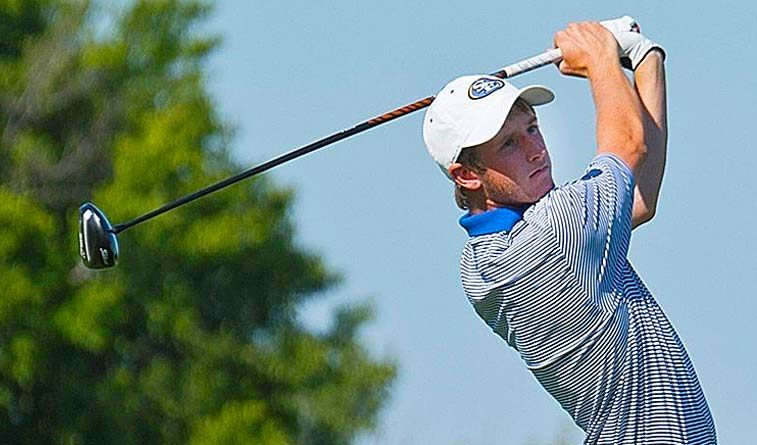 WICHITA FALLS, Texas – Freshman Aidan Gavey ranks third and the Rogers State men’s golf team sits in fifth out of 15 teams after the first day of the Midwestern State Invitational on Monday at the Wichita Falls Country Club.

Zach James of Southeastern Oklahoma State holds a one shot lead at 4-under-par 138. He moved up the leaderboard in the second round with a 4-under-par 67.

Gavey, a freshman from Caledonia, Ontario, started strong in the opening round in the morning with a 1-under-par 70, matching his best round in his short time in the navy and red. In the second round in the afternoon, the freshman shot an even-par score of 71 to sit in a tie for third at 1-under-par 141. Gavey took advantage of the par fives today as he ranked third in the field in par-five scoring at 3-under-par. For his 36 holes, he posted eight birdies.

Fellow freshman Luke Palmowski fired rounds of 2-over-par 73 and 1-over-par 72 for a total of 3-over-par 145 to rank in the top 20 after the first day. The freshman from Rotherham, England was the most consistent golfer in the field with a tournament-high 31 pars on the 36 holes. He totaled one birdie and four bogeys for the 3-over-par score.

Junior Patrick Bart put together a two-round score of 5-over-par 147 for the third spot in the Hillcat lineup. He opened the tournament by turning in a round of 3-over-par 74. In the second round, Bart shot 2-over-par 73. The junior from Burnham, England registered 24 pars, four birdies, seven bogeys and a double in his 36 holes today.

After a first round of 9-over-par 80, senior Alex Marsh improved by nine shots for an even par 71 in the second round. For the two rounds, the senior from Southampton, England ranks in 50th at 9-over-par 151. The second round included six birdies as Marsh totaled nine birdies in the 36 holes, the second most in the field. The senior was the best in the field in par-three scoring at 2-under-par.

Freshman Richard Cheetham carded a 36-hole score of 12-over-par 154 in the opening rounds today. The freshman from Sittingbourne, England opened today tallying a round of 7-over-par 78. Cheetham was two shots better in the second round at 5-over-par 76. The freshman was strong on par threes at 1-under-par for fourth in the field.

Host Midwestern State ranks first in the field with a two-round team score of 3-under-par 565. Texas A&M – Commerce sits in second at 5-over-par 573.

Zach James of Southeastern Oklahoma State holds a one shot lead at 4-under-par 138. He moved up the leaderboard in the second round with a 4-under-par 67. Trip Hobson of MSU ranks second at 3-under-par 139.

The final round is tomorrow morning with a shotgun start at 8:30 a.m. at the Wichita Falls Country Club. The Hillcats will start on No. 5, 7-9 and 11.