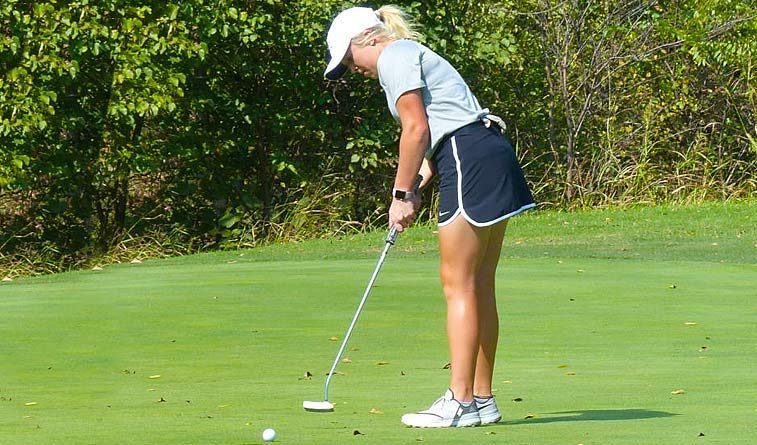 Photo: OC freshman Shaley Goad rolled in five birdies in the first round of the Oklahoma Intercollegiate.

FORT SILL, Okla. (Oct. 16, 2017) – With three players in the top 10, Oklahoma Christian put itself in position to defend its tournament championship in the Oklahoma Intercollegiate, which began Monday at Fort Sill Golf Course.

OC’s team score of 291 put the Lady Eagles in second place in the 12-team event, just six shots behind the leader, Midwestern State (Texas). It looks to be a four-team race during Tuesday’s final round, with Tarleton State (Texas) and Angelo State (Texas) just one and two shots, respectively, behind OC.

OC took the team title in the event last year, led by Kate Goodwin, who took top individual honors. She also has a chance to repeat, as her 2-under-par 70 in the first round has her tied for fourth, three shots back of co-leaders Emily Brennan of Midwestern State and Kamryn Cummings of Angelo State.

Two Lady Eagles were tied for eighth after shooting 1-under 71s on the 5,933-yard course – sophomore Abigail Rigsby and freshman Shaley Goad, who is playing as an individual in the tournament. Goad had five birdies while Rigsby, Goodwin and teammates Ashton Nemecek and Felicity Wittenberg had three apiece.

The final round of OC’s final event of the fall season will begin at 9 a.m. Tuesday.