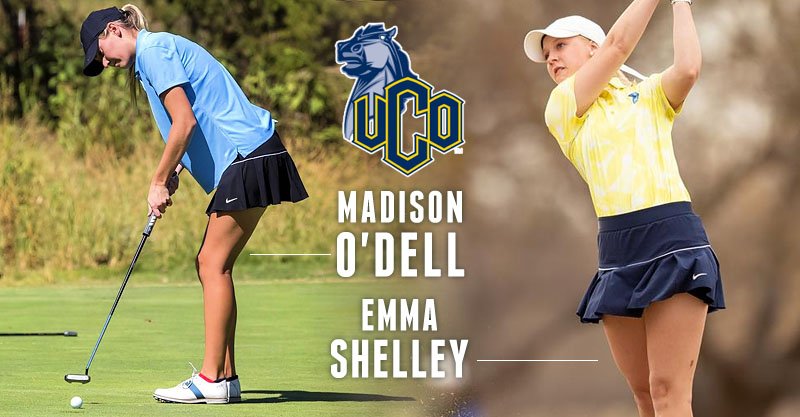 The Bronchos are third in the 17-team field after firing a 303 at the 6,043-yard, par-72 Pine Lakes Course at Jekyll Island Golf Club. Columbus State leads at 298, with Carson-Newman second at 302.

Final-round play starts at 7:30 a.m. Central time Tuesday in the final tournament of the fall season for UCO.

“We kept our mistakes to a minimum and played pretty solid,” head coach Michael Bond said. “We’ve got a chance, but we’re going to have to play well tomorrow.”

Susana Olivares was right behind Shelley and O’Dell with a 76, while Taylor Towers came in with a 77 and Mika Ramos an 83.

Shelley opened play on No. 1 and started with eight straight pars before bogeying No. 9 for a front-nine 37. The sophomore was still at one-over after birdieing the par-4 13th, then double bogeyed No. 16 in coming in with a 38 on the back nine.

O’Dell started on the second hole and was two-over after seven holes before making birdie on the par-4 10th. She dropped back to three-over with consecutive bogeys on Nos. 12 and 13, then finished with five straight pars for her 75.

Shelley and O’Dell are tied for sixth in the individual standings.

Olivares got off to a rough start with bogeys on four of her first five holes, but the sophomore rebounded with 13 consecutive pars to finish the day in shooting 76.

Towers made 11 pars and six bogeys along with a lone birdie on her final hole for a 77.