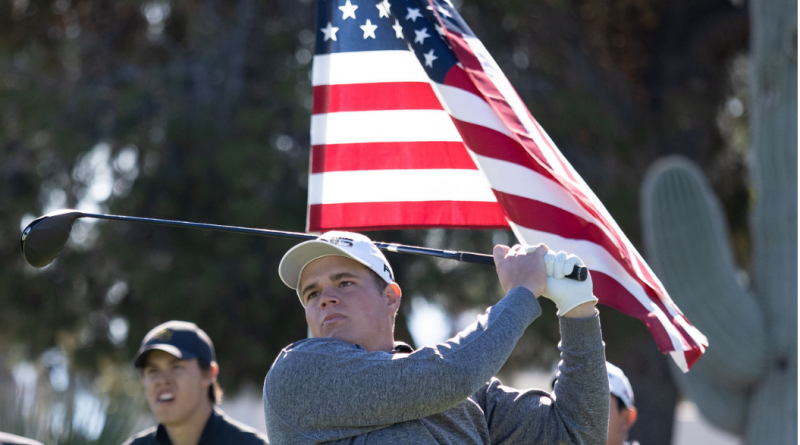 Above: Mason Overstreet of Kingfisher tees off in the Patriot All-America Invitational.

It was not a banner first round Wednesday for the seven players with Oklahoma ties competing in the 2020 Patriot All-America Invitational at The Wigwam Golf Club in Litchfield Park, Ariz.

University of Oklahoma teammates Patrick Welch and Logan McAllister led the local contingent with rounds of 3-over 73, eight shots behind co-leaders Graysen Huff and Joey Vrzich who each shot 5-under 65.

Trevor Norby of Oklahoma Christian is tied for 53rd with Stephen Campbell Jr. of OU after shooting 74. Mason Overstreet of Kingfisher and the University of Arkansas shot 75. Bradley Wright of Rogers State University shot 78 and Jared Strathe of Owasso and Oral Roberts University came in with a 79.

Huff and Vrzich lead a stacked leaderboard of 84 of the world’s top amateur players at the Wigwam Golf Club’s Gold Course. View the entire leaderboard here.

“I took a couple weeks off leading up to this, and I haven’t been playing as much taking some family time,” said Huff, a senior at Auburn University from Eagle, Idaho. “So it’s good to come back and put a good round together. I just had a lot of things go my way today, and that’s where the score comes from.”

“I had trouble getting the ball to the hole for a while, then started making some putts,” said Vrzich, a Pepperdine University senior from El Cajon, Calif. “I came off a 65 last year in the final round so it feels good to do that again.”

Huff recorded five birdies in a bogey-free round at the Wigwam Golf Club’s Gold Course, all coming in the first 10 holes. Vrzich, meanwhile, had seven birdies on his scorecard, but four-putted the par-3 6th hole for a lone double-bogey.

“I was kind of mad about that – I bogeyed that hole every day last year,” said a laughing Vrzich, playing in his second Patriot All-America. “I wanted to par it this year and I still couldn’t.”

John Keefer of Baylor University, Maxell Moldovan of Ohio State University, Jacob Skov Oleson of Texas Christian University and Harrison Ott of Vanderbilt University are all one shot behind the leaders after shooting -4 (66), respectively. Another four players are all within three shots of the lead.

Keefer, a Baylor University freshman from San Antonio, Texas, made a hole-in-one on the 191-yard par-3 6th, landing a seven-iron over a greenside bunker and finding the bottom of the cup.

The Patriot All-America honors fallen or severely wounded soldiers in partnership with the Folds of Honor Foundation. The golfers receive a golf bag donated by PING Corporation at the event’s opening ceremony emblazoned with the name and branch of service of a fallen or injured military member whom they shall represent.  Participants also receive a card with the soldier’s story so they can be familiar with that soldier.

At the conclusion of the tournament, the golf bags are shipped to players’ schools and auctioned with all proceeds benefitting the Folds of Honor Foundation.

The Patriot All-America is a collaboration between the Arizona Golf Association, Golf Coaches Association of America, JDM Partners and the West Valley Mavericks in partnership with the Folds of Honor Foundation and support from the Thunderbirds, the Waste Management Phoenix Open host.

About The Patriot All-America Invitational

Featuring golf’s stars of tomorrow, The Patriot All-America is regarded as a top amateur event nationally, attracting PING All-America golfers from all three NCAA Divisions, NAIA and NJCAA rankings as well as from universities outside the United States.  The Arizona Golf Association (AGA), JDM Partners and the Golf Coaches Association of America (GCAA) partnering with the Folds of Honor Foundation to host the tournament. For more information visit patriotallamerica.com.