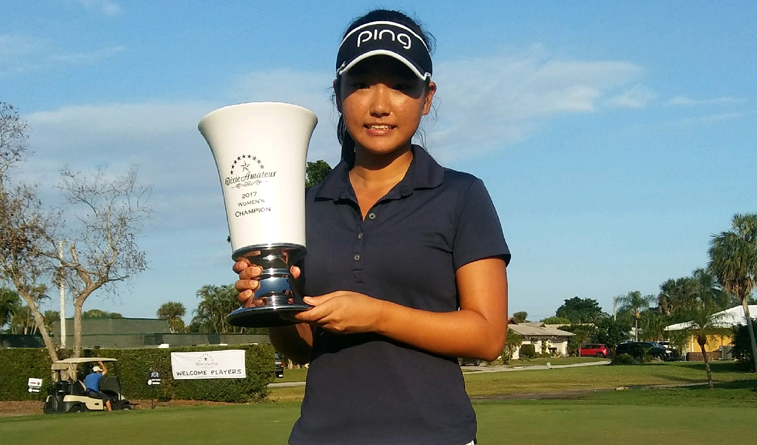 Final results can be found here.

TAMARAC, FL (December 22, 2017) – Yujeong Son is only 16, but she already makes decisions deliberately and always with an eye on the future. Son is firm in her thinking that college golf isn’t for her. She’s always had an eye on playing professionally, and she’s already taking steps to get there.

As the tournament victories pile up, Son’s intuition looks good. On Friday, she became only the second player to successfully defend her Dixie Women’s Amateur title in the event’s history. Son joins Paula Reto, who followed Son around the course in a golf cart during the final round then presented her with the trophy at the end of the day. Reto, a member of the Purdue women’s golf team that won a national title in 2010, will begin her fourth LPGA season in roughly a month.

How long until we see Son there with her? It’s hard to say, even from Son’s perspective.

“We’re thinking about maybe in the next two years to turn pro,” said the 16-year-old, who understands that there’s more to it than just declaring herself a professional.

Events like the Dixie are a good way for Son to see how her game measures up. Paired with Arkansas junior Maria Fassi and UCLA freshman Patty Tatavanakit for the final round (both are ranked inside the top 8 in Golfweek’s college rankings), Son didn’t miss a beat. She made four birdies and no bogeys on the way to a final-round 68 and a three-shot victory. Son only had two bogeys in 72 holes at Woodlands Country Club in Tamarac, Fla.

“It helps a lot, actually,” Son said of playing a tough tournament schedule. “Competition golf is a lot different than practicing.”

The only player who gained ground on Son in the final round was Cindy Kou, a junior golfer who carded eight birdies on the way to a final-round 64 and a 10-under total. Tavatanakit was third at 8 under and Arkansas junior Dylan Kim — who started her day double bogey, bogey but recovered with seven birdies — was fourth.

In her United States debut, 15-year-old Lily May Humphreys battled headaches and allergies to finish fifth. Humphreys’ stock rose this summer with a British Girls Amateur victory, and she played the Dixie on a whim. She had received an invitational to the Junior Orange Bowl, and was looking for more stateside competition. After receiving a spot on the provisional GB&I Curtis Cup squad earlier this month, Humphreys hopes to be back this spring competing in the Cup itself.

After the Dixie – which Son entered last year at the recommendation of friend and fellow junior golfer Jennifer Chang – she’ll play the Allstate Sugar Bowl Tommy Moore Invitational in New Orleans, which she also played last year and won. Then it’s back to South Florida for the Harder Hall Invitational.

The timing is good for the Norman, Okla., resident.

“It’s the winter, it’s cold, so it’s good to catch the Florida sun,” she said.

Son’s family moved to Stillwater, Okla., from South Korea when she was six years old. Roughly a year later, they moved to Norman. Son’s mother studied architecture at Oklahoma State University for a year and now works as an architect, designing public buildings such as schools. Both of Son’s parents play golf, but the sport didn’t stick with Son’s older sister like it did with her.

Son’s father Youngjin was with his daughter every step of the way for the Dixie. When Son is allowed a caddie, it’s generally always her dad.

Even though Son practices at Jimmie Austin OU golf club, the same course as University of Oklahoma players, she says she doesn’t often see them. The only team-golf experience she has is from her freshman year in high school. After that, Son left traditional school in favor of home school.

“It gives me so much more time for golf,” said Son, who turns up her nose at studying. That plays a role in her desire to go straight to the professional ranks.

Since her last Dixie Amateur victory, Son has gotten a taste of what her future might look like. By winning the AJGA’s Swinging Skirts Invitational in August, Son got an exemption into the LPGA Taiwan Championship in October.

“It was so fun, I didn’t play good, but it was so much fun,” she said. “It was more than what I thought it would be.”

The LPGA Taiwan offered an inside look at how professionals perform, and Son soaked it all in.

For a talented and self-confident player like Son, the LPGA awaits.