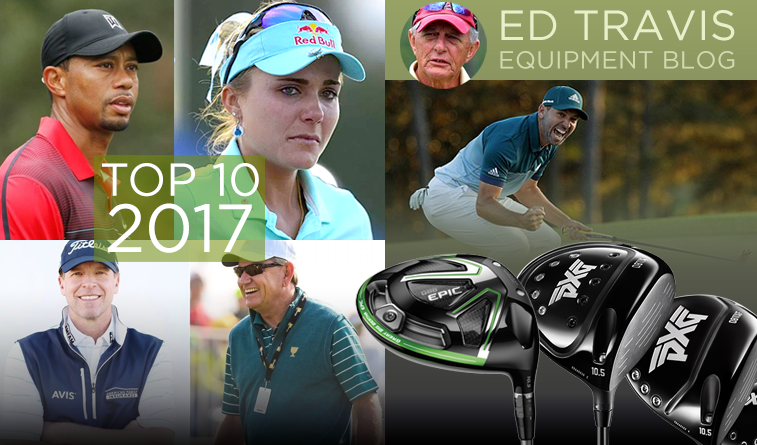 Tiger Woods comes back . . . again: A WD in Dubai in February. Another back surgery in April. A DUI arrest in May with a follow-up treatment program. Tiger Woods came back to golf in December for an 18-man exhibition that had some in the media and some of his fans in a frenzy of expectation and speculation. The facts are Woods looked physically fit, seemed to have a positive attitude and played fairly well though his short game obviously needs some work if he is to achieve his goal of besting Jack Nicklaus’ major record.

Rollback or Bifurcation: Tiger Woods and Dustin Johnson say it’s true. Gary Player, Jack Nicklaus, Hale Irwin and USGA Executive Director Mike Davis agree. The golf ball goes too far. Woods certainly never said this when his prodigious length was blowing away fields and Johnson, who is even longer, admitted a restricted flight ball would be to his advantage. But as savvy, knowledgeable and vested in the game as these gentlemen are, there’s a problem. Neither the available data nor a logical appraisal of the facts support their contention. This, however, hasn’t stopped them from proselytizing a rollback of ball performance or the creation of the equally objectionable alternative, separate equipment regulations for professionals, i.e., bifurcating the rules.

TMaG Sold: It took a year but Adidas AG (OTCMKTS: ADDYY) was finally able to find a buyer for TaylorMade Golf, Adams Golf and apparel-maker Ashworth. Purchaser KPS Capital Partners, a private investment group, paid $425 million, less than half of the 2016 sales figure, and it could turn out to be a bargain. If KPS does as expected and applies the classic turnaround remedies – cutting costs, growing sales and refocusing management –  it could recoup its investment by selling the company or taking it public in maybe as few as three years,

Lexi Thompson: Lexi Thompson, the best American player on the LPGA Tour, was penalized four strokes, costing her the ANA Inspiration, after a television viewer sent an email about a possible rules infraction the day before. There was lots of official mumbling, something about fair application of the Rules of Golf, but in December the USGA announced effective Jan. 1, no more viewer call-ins or emails about possible rules infractions will be allowed. Many think this reasonable application of common sense is long overdue. Golf now is in line with other sports where the official’s job is to officiate, and the viewer’s job is to view.

Presidents Cup Rout: The U.S. President’s Cup team captained by Steve Stricker beat up on Nick Price’s Internationals by such a lopsided margin the U.S. actually was one-half point from clinching the win before the final day singles matches. Two takeaways, first those who criticized Striker for picking Phil Mickelson were wrong . . . again. Lefty earned 3½ points and, as he has done in the past, was an inspirational leader for the team. Second and more importantly for the future of the Presidents Cup, continued U.S. dominance has made it essentially an exhibition masquerading as a real competition. This needs to be fixed before the Presidents Cup becomes totally irrelevant to players and fans, if it hasn’t already.

Callaway Surges: During the past three years Callaway Golf (NYSE:ELY) took over TaylorMade’s dominant sales position in woods and irons with products such as the technically innovative Epic driver. Callaway’s irons have been first in sales for over two years and for the past four years they have been the fastest growing major golf ball company. Company sales for 2017 are expected to be approximately $1.035 billion up substantially from the $871 million in 2016.

PXG Success: Parsons Xtreme Golf (PXG) may not be a major factor in the equipment business but owner Bob Parsons has a real success story he can boast about for this new and somewhat edgy club company with really expensive equipment (the basic driver costs $700). PXG rang up $38 million in sales for 2016, its first year in business, which was great but 2017 looks spectacular. Parsons told Dave Dusek of Golfweek, PXG will have sales of $100 million for the year but more astonishing, make a profit which may be a record for an upstart club company.

PGA Tour Shake Up: Ever mindful of the futility competing for fans attention with the NFL, the PGA Tour has some big changes coming in the 2018-2019 season. The PGA Championship will be played in May beginning in 2019 rather than August and The Players Championship now in May will move to March. The shakeup includes reducing the FedExCup Playoffs from four to three events allowing the Tour to finish before the NFL season kicks off plus provides some room for schedule tweaks in Olympic years.

Major Winners: Sergio Garcia finally won a major and appropriately it was the Masters. Long-hitting Brooks Koepka won the U.S. Open, also his first major, doing it in fine style. Jordan Spieth had another multiple win year capped off with The Open at Royal Birkdale. Then there was Player of the Year Justin Thomas, who began the year with a 59 in the Sony Open and finished with five wins including the PGA Championship. Each of these players has his own compelling story and next season it should be even more exciting with the return of Woods.

LPGA Commissioner Michael Whan had quite a year: In the Solheim Cup, the American squad beat up on Team Europe and subsequently Whan offered to aid the financially struggling Ladies European Tour. He had to cancel the Alisport Shanghai tournament from a lack of proper permits and then caused an eruption of controversy by having to shorten the Evian Championship major to 54 holes from a lack of dry weather. Hall of Famer Juli Inkster then rattled some cages with her outspoken contention that corporations are unfairly depriving the LPGA of a fair share of monetary support. But when the player’s dress code was modified, social media and some conventional media were exposed at their worst.