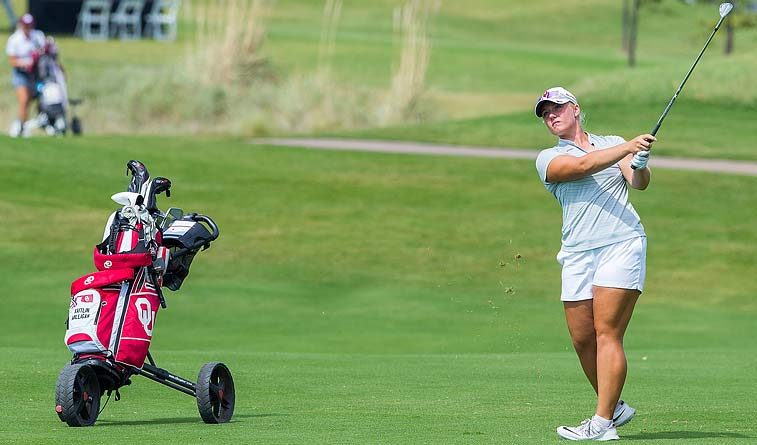 Oklahoma women’s golf is tied for fifth place after one round of action at the Maryb S. Kauth Invitational in San Antonio, Texas. The Sooners shot 296 (+7) at the par-72, 6,450-yard Briggs Ranch Golf Club.

Junior Julienne Soo carded a pair of eagles, finishing the round tied for fourth place. Soo shot a 2-under 70 and is four strokes out of first.

As a team, the Sooners are five strokes out of second place and 14 strokes behind first-place Arkansas, who entered the tournament ranked No. 1 in the nation.

“We played solid most of the day but struggled coming down the stretch,” said OU head coach Veronique Drouin-Luttrell. “If we focus on doing the little things better we’ll be in good shape the rest of the way.”

Freshman Kaitlin Milligan is tied for 16th, shooting a 73 (+1) in a round that featured three birdies. Senior Hannah Wood finished the day with a 75 (+3) and is tied for 29th.

The Sooners begin the second round at 9:10 a.m. Monday, teeing off of hole No. 1 alongside golfers from Houston and host UTSA. Live scoring is available on BirdieFire.com.