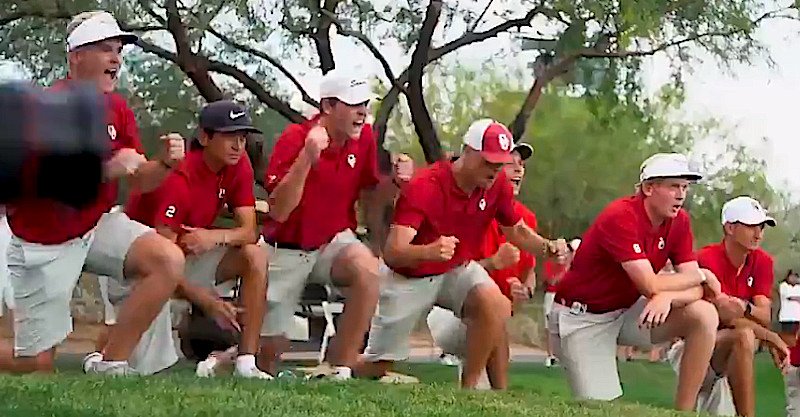 The fourth-seeded Oklahoma men’s golf team advanced to the NCAA men’s golf national championship on Tuesday by defeating both No. 5 Illinois and No. 1 Arizona State 3-2 in the quarterfinal and semifinal matches. The Sooners will take on No. 3-seeded Pepperdine on Wednesday at 3:35 p.m. CT with coverage on Golf Channel starting at 4 p.m. CT.

Pepperdine crushed OU 4-1 early this season in the East Lake Cup and rolled into the finals with a dominating 3-0-2 victory over Oklahoma State. Making matters more difficult for coach Ryan Hybl as his team seeks its second national championship since 2017 is that he is seemingly down to four healthy players with any degree of confidence.

Patrick Welch and Garret Reband, both mainstays of the program for the past three years, are struggling to the point where they have not been competitive in stroke play or match play. That forces Hybl to start freshmen Ben Lorenz and choose between Welch or Reband for the final spot. Welch lost 8 and 6 in the semifinals against Illinois and Reband was six down through 10 holes in a 5 and 4 loss to Chun An Yu.

Fortunately, the Sooners still have Quade Cummins, Jonathan Brightwell and Logan McAllister, all three of whom were undefeated Tuesday.

After Arizona State took a 2-0 lead, those three won their matches to send the Sooners to the final. McAllister defeated Mason Anderson 4 and 3, Brightwell pulled out a 1 up victory over David Puig and Cummins polished off Cameron Cisk with a 6-foot birdie putt on the 17th hole.

Brightwell, the senior transfer from UNC Greensboro, was clutch all day, including on the 18th hole where he had to make a nervy 4-foot par putt. He also received the break of the tournament when his tee shot on that hole was heading left into desert brush when it hit a cart path several times and eventually kicked back to the right into the rough.

Cummins, who struggled with his putting on the final day of stroke play, was rolling it much better in match play and willed himself and his teammates into the finals. The sixth-year senior from Weatherford came back to OU for the opportunity to win a second national championship.

Sisk made a putt from off the green on No. 15 to pull within a shot of Cummins, but Cummins drove the green on the drivable par-4 17th while Sisk laid up with an iron then watched his wedge second shot from the rough bounce over the green.

“Just so excited for our guys in this moment,” 12th-year head coach Ryan Hybl said after the semifinal win. “To watch Quade put in that putt right there and have a chance to play for a national championship is exactly why a guy like that came back.”

Oklahoma, which won the title in 1989 and 2017, opened the morning with a tight 3-2 win over Illinois that wasn’t decided until the next-to-last hole. The contest started when Welch was downed 8 and 6 by Adrien Dumont de Chassart to put Oklahoma into an early 1-0 hole. OU would answer with a near hole-in-one from Brightwell on the par-3 eighth after starting on the back nine. Brightwell’s tee shot bounced off the pin, and the senior sunk a two-foot birdie putt to secure a 3 and 1 victory to tie the match.  Lorenz was dispatched 4 and 3 by Illinois’ top player, Michael Feagles. Facing elimination and needing to win both remaining matches, Cummins and McAllister took over. After building a 3-up lead thru seven holes, McAllister found himself tied with Jerry Ji thru 15. The junior then buried a five-foot par putt on No. 7 and birdied No. 8 to knock off Ji 2 and 1 and even the team battle. Sixth-year player Quade Cummins took a two-hole lead on the fourth hole of his match and never surrendered it, holding off Tommy Kuhl to win 2 and 1 to send the Sooners to their first semifinal since 2017.

Facing top-seeded Arizona State in the semi, the Sooners dug a hole for themselves early once again. Garett Reband was downed 5 and 4 by fellow PGA Tour U honoree Chun An Yu and Lorenz lost 3 and 2 to Ryggs Johnston. The Sooners would once again need to find three wins from Cummins, Brightwell and McAllister.

“The 18th is such a tough hole and this course has really tested us all week,” Brightwell, said. “I knew that if I just got up-and-down that it would probably, hopefully, be enough to get the win for us and so I put a really strong chip onto the green and was able to help gets us one step closer.”

The first point came from McAllister, who erased a one-hole deficit by winning four of five around the turn to claim a convincing 4 and 3 win over Mason Andersen. Up next was Jonathan Brightwell, who delivered a massive putt on the 18th green to halve the hole and hold off a late charge from All-American David Puig to win 1-up and even the leaderboard. The Sooners’ fate rested on the hands of Cummins, who served as the sixth man on the 2017 national championship team.

The Weatherford, Okla., native dropped the 16th hole to allow Cameron Sisk to move to just one back. But the OU leader wouldn’t be stopped on the 17th, which he drove 330 and onto the green in one while Sisk laid up and found the rough. A two-putt for birdie is all that Cummins would need to send Oklahoma to the final match, and he delivered by sinking a 5-footer to send the Sooner fans surrounding the green into a frenzy.

Hybl, who donned the same sweater vest he wore during the 2017 championship for the first time Tuesday, has returned Oklahoma to a national prominence as the Sooners are the nation’s only team to appear in match play at the last five championships, and with the two wins on Tuesday, the team improves to 5-3 all-time in NCAA matches under the 12th-year leader. More importantly, a third national title on Wednesday would give Oklahoma the ninth most team title’s in men’s golf history.

Pepperdine is a familiar foe for Oklahoma as the two traded the nation’s No. 1 spot in the fall after the Waves knocked off the Sooners 4-1 in the East Lake Cup finals. None of the matchups from that battle in Atlanta will be reprised in Wednesday’s final, but the opportunity for redemption is still present.

“They got us pretty good last time we matched up with them,” Cummins said. “We’re not satisfied just getting to the finals. We came here with a goal in mind and that was to win. They’re a great team, and we look forward to the chance to get them back.”

The championship match is set to begin at 3:35 CT with live coverage starting at 4 CT on Golf Channel.

“It’s really disappointing because we were having so much fun and everyone was playing well but Oklahoma is good,” said Arizona State’s Ryggs Johnston.  “When you put yourself in a position to play the best in the final four you’re going to get beat sometimes. That’s the way sports works. I know I left everything out there and so did the other four.”