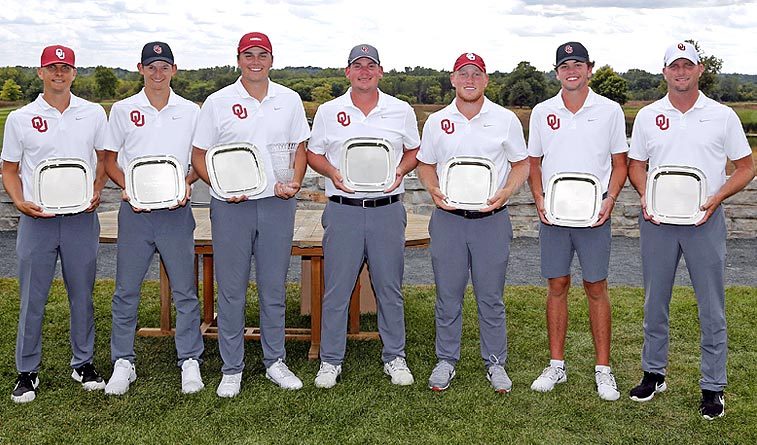 At the turn, the Sooners trailed Iowa by six strokes but used a furious comeback down the stretch to take home the team title. OU’s lineup carded 16 birdies on the back nine and played the final nine holes at -11 to secure the win.

The Sooners posted a 278 (-6) during the final round to earn their third title at the Gopher Invitational in the last four years. The victory marks the 22nd win for the Sooners under 10th-year head coach Ryan Hybl. OU has won six of its last eight tournaments dating back to last season.

“That was an unreal finish by our team,” Hybl said. “That will go down in the record book as one of the greatest team finishes in school history.”

Senior Blaine Hale shared medalist honors with Arkansas’ William Buhl at 206 (-7) for his first individual title of his collegiate career. Hale was the only player at the event to post three rounds in the 60s and used a birdie on hole No. 18 to split the individual title with Buhl. The senior logged a 69 (-2) during Monday’s final round and closed the day with birdies on five of the final six holes.

Junior Riley Casey picked up his second straight top-10 finish with a three-round 213 (E), tying for ninth overall. Casey turned in his best round of the tournament with a 69 (-2) on Monday.

Senior Brad Dalke finished in a tie for 18th place at 216 (+3). Dalke fired a 69 (-2) during the final round on Monday and pocketed four birdies, three of which came on the final three holes.

Freshman Logan McAllister claimed a share of 28th place with a three-round total of 218 (+5). McAllister turned in his best round of the week with an even-par 71 Monday.

OU returns to action Sept. 31-Oct. 2 at the Nike Collegiate Invitational in Fort Worth, Texas, held at Colonial Country Club.