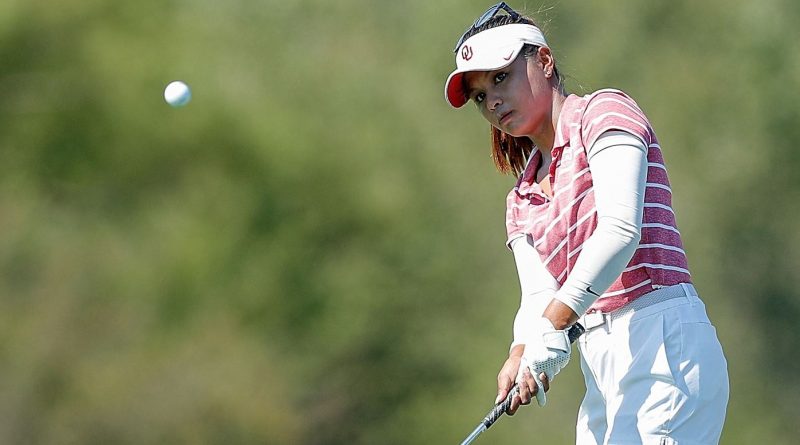 NORMAN – Playing in its only home tournament of the season, Oklahoma women’s golf enters the final round of the Schooner Fall Classic in first place. The Sooners shot a 275 (-5) on Saturday at the par-70, 6,048-yard Belmar Golf Club to maintain their one stroke lead over Texas.

Oklahoma boasts a two-day total of 557 (-3) to lead the 15-team field for the second day in a row. The Sooners are ahead of four top-25 teams, including the No. 2-ranked Longhorns.

“We played solid again today,” said OU head coach Veronique Drouin-Luttrell. “Last night when we went to the OK Kids Korral, our team was given a tour by a 12 year old. She was such an inspiration to all of us. It helped remind us that golf is just a game, and that playing it should be fun. We have really started embracing that.”

Sophomore Mikhaela Fortuna leads the 81 golfers after firing a 3-under 67 in her second round. The sophomore carded three birdies on the front nine and went bogey-free over her final 13 holes. She is one stroke ahead of Texas’ Kaitlyn Papp and Florida State’s Frida Kinhult, who is ranked No. 5 in the World Amateur Golf Ranking.

Two strokes behind Fortuna is teammate Kaitlin Milligan. The Norman native shot an even 70 on Saturday and is tied for fourth with a 36-hole score of 137 (-3).

The Sooners saw a pair of bounce-back performances from Sydney Youngblood (31st place) and Libby Winans (36th). Youngblood shot a 5-over 75 on Friday while Winans produced a 6-over 76, but the duo recovered Saturday by both shooting a 69 (-1).

In addition to the five Sooners in the lineup, Oklahoma has three individuals competing throughout the weekend. Junior Hannah Lee leads the trio with a 140 (-1) and is tied for 11th. Senior Ellen Secor is tied for 36th with a 145 (+5) and freshman Linley Ooi is tied for 67th.

Oklahoma begins its final round on Sunday morning at 10:10. The Sooners will be paired with No. 2 Texas and No. 25 Alabama.