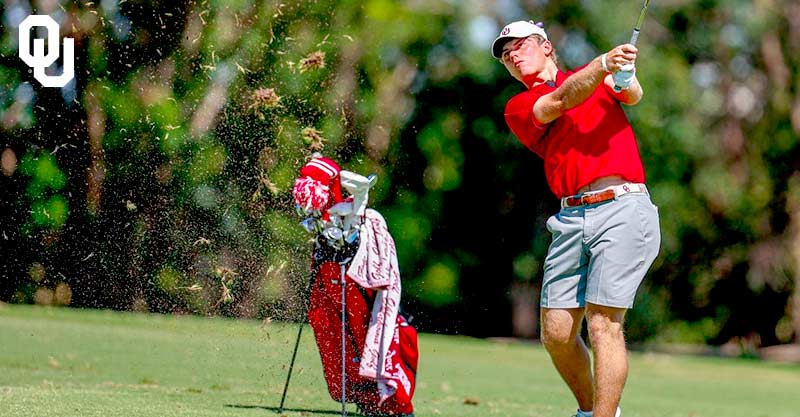 ST. SIMONS ISLAND, Ga. — The Oklahoma men’s golf picked up where it left off last season, opening the 2022-23 season by firing rounds of 21- and 23-under at the Frederica Cup on Wednesday. Logan McAllister and Chris Gotterup may now be chasing their professional careers, but the Sooners evidently have plenty of firepower remaining.

The No. 9-ranked Sooners (2, -44) will enter Thursday’s final round two shots back of No. 1 Vanderbilt (1, -46) as two of college golf’s giants are poised for another showdown. A host of Sooners are in contention for medalist honors as well with Drew Goodman, Patrick Welch, Stephen Campbell Jr., and Jase Summy all inside of the top 12 on the individual leaderboard.

“The guys had great energy all day and we finished so strongly this afternoon,” head coach Ryan Hybl said. “We played the par-5s very well all day, which is a must out here around Frederica.”

The season-opening, eight-team Frederica Cup features a unique six-count-five format, but the Sooners are still chasing history. If you adjust to five-count-four scoring, Oklahoma needs a combined 19-under from four players on Thursday to break the school record of 59-under for a five-count-four 54-hole team score, set in last season’s Puerto Rico Classic.

“Drew has been playing great back home, so this was no surprise,” Hybl added. “He continues to carry his strong momentum into competition.”

The sophomore is looking for the first win of his college career after posting four top-10 finishes as a freshman, including a runner-up placement at the 2022 Southern Highlands Collegiate last spring.

“I just made a ton of putts today and was able to really get rolling,” Goodman said. “This course is really gettable when you’re hitting the ball in decent spots and I did that well today. If I can execute the same way tomorrow then I’ll have a chance to go win.”

Welch, a preseason Haskins Watch List selection, continued his strong run of play by carding a 68 (-4) and 65 (-7) to sit alone in seventh after two rounds. Welch (7, -11) was among the field’s best down the stretch Wednesday, sinking an eagle on No. 7 followed by five birdies and no bogeys to close his day.

Campbell Jr. (11, -8) posted a career-low 66 (-6) in round one and then a 70 (-2) in the afternoon wave to grab 11th at 8-under. During his career round in the morning, the Richmond, Texas, product tallied six birdies and no bogeys to set the pace early for the Sooners. On Thursday, with an even-par or better round, he would top his career-best 54-hole score of 209, set last season at the Thunderbird Collegiate.

True freshman Jase Summy made his debut on Wednesday and reminded everyone why he was one of junior golf’s top prospects in 2022. Summy (T12, -7) struggled in the morning, posting a 72 (E), but shined later in the day, firing a bogey-free 65 (-7) to catapult up the leaderboard.

Oklahoma tees off Thursday with the top-ranked Commodores at 7:24 a.m. CT off the first tee. The Sooners and Commodores were last paired in the final round of the 2022 NCAA Championship, where they tied for first in stroke play. Vanderbilt’s William Moll (-15) holds a one-shot lead entering the final round of play.