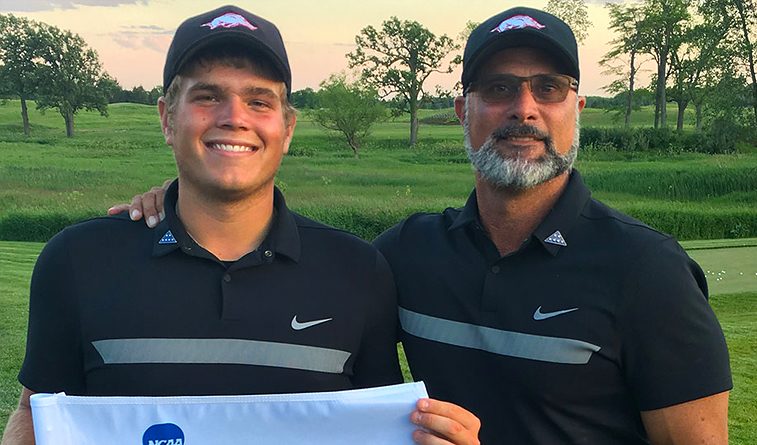 Editor’s note: Oklahoma State was upset by defending champion Oregon in the opening round of match play this morning 3 and 2. Oklahoma edge Baylor 3 and 2 and is currently in the national semifinals against Illinois. Live scoring is here.

Making its return to match play at the NCAA Division I Men’s Golf Championship for the first time since 2014, Oklahoma State’s men’s golf team came up just short in its quarterfinal match against Oregon on Tuesday, suffering a 3-2 defeat at Rich Harvest Farms.

By advancing to match play, the Cowboys earned a fifth-place finish, marking the 53rd time in 70 NCAA Championship appearances OSU has finished in the top five.

The Cowboys posted the first two points of the match, getting victories from Viktor Hovland in the leadoff match and Zachary Olsen in Match 3 at the par-72, 7,300-yard layout.

Hovland defeated former Cowboy Wyndham Clark, 2 and 1, while Olsen took down Norman Xiong by a 3-and-1 count.

Starting on the back nine, Hovland lost the 11th and trailed until he squared the match at the 14th.  He and Clark remained all square at the turn before Hovland won the first and second to take a 2-up lead. Clark won the fourth before the OSU freshman claimed the fifth and halved the final three holes to close out the match.

Olsen dropped the 12th before squaring his match at the 13th. Xiong took two of the next three holes and held a 1-up lead at the turn. The Cowboy senior squared the match at the second and again at the fourth before winning Nos. 5, 7 and 8 to put OSU’s second point of the day on the board.

Oregon answered quickly with Edwin Yi winning the final hole of his match against junior Kristoffer Ventura for a 1-up victory.

Ryan Gronlund evened the match at two apiece with a 2-and-1 victory over sophomore Zach Bauchou.

Sulman Raza closed out the match with a 2-and-1 triumph over sophomore Hayden Wood, rolling in a 10-foot birdie putt at the eighth hole to secure the Ducks’ third point and send Oregon into Tuesday afternoon’s semifinal round.

The state of Oklahoma had multiple reasons to celebrate Monday at the NCAA Championship at Rich Harvest Farms. Both Oklahoma and Oklahoma State qualified for today’s match play championships, while Arkansas freshman Mason Overstreet, who grew up in Laverne and finished his high school career at Kingfisher, was the individual runner-up.

The Sooners finished stroke play in second place to secure their spot among the final eight teams in the national tournament, held in Sugar Grove, Ill.

Battling high winds all day, OU posted a 304 (+16) in the fourth round to total 1151 (-1) for the event and hold second place for the third consecutive round. The No. 13-seeded Sooners joined No. 3 Vanderbilt as the only squads to finish stroke play under par at the par-72, 7,300-yard Rich Harvest Farms.

“What a crazy day,” eighth-year OU head coach Ryan Hybl said. “The golf course played extremely difficult and we did enough to get the job done. Our guys have felt great all week and they are excited for the opportunity to play Baylor tomorrow. Match play is a different game, and our guys will be great.”

The top eight teams at the end of stroke play qualify for the quarterfinals of match play on Tuesday. The Commodores claimed first with an overall 1139 (-13) and will face No. 12 UNLV, who tied for seventh at 1159 (+7). The Sooners will face Big 12 foe No. 5 Baylor, who tied the Rebels.

The winners of each match will advance to the semifinals, which are scheduled to begin Tuesday afternoon.

This marks the second time in program history the Sooners have advanced to match play, which was introduced to the NCAA Championships in 2009. Oklahoma also joins Vanderbilt, Illinois, Oregon and USC as the programs to qualify for match play the past two seasons.

Sophomore Blaine Hale was OU’s best finisher, tying for 11th with a 72-hole 286 (-2), marking the Sooners’ best individual placing at the national tournament since 2012. The showing was also his fourth in the top 20 this season. With three birdies on the challenging back nine, Hale carded a 75 (+3) in the fourth round.

Senior Max McGreevy also claimed a spot in the top 20, sharing 16th place, one stroke behind Hale. He posted a 78 (+6) on Monday to earn the 37th top-20 finish of his career and his 10th of the season.

Additionally, McGreevy posted a 71.40 scoring average in his last season as a Sooner over 43 rounds of stroke play. This average is the second lowest in program history, according to records dating back to the 1993-94 season.

Junior Rylee Reinertson rounded out the Oklahoma lineup, claiming a share of 65th. Reinertson tallied an 83 (+11) to finish stroke play at 299 (+11) overall.

The Sooners will square off with the Bears in the quarterfinals of match play on Tuesday with tee times beginning at 7 a.m. CT from hole No. 1. Live scoring will be available on GolfStat.com. The Golf Channel will televise competition live from 10:30 a.m.-12:30 p.m. CT, and pregame coverage is scheduled to begin at 9 a.m. CT.

Oklahoma State secured a spot in the match play bracket by posting a 15-over score of 303 during its fourth round on Monday to finish alone in fourth place at Rich Harvest Farms.

OSU wrapped up the stroke play portion of the event with a 3-over total of 1,155 to finish a shot off the pace of Illinois for third place.

Ole Miss’ Braden Thornberry carded a closing 71 to capture medalist honors, finishing at 11-under 277, four shots ahead of Overstreet.

Viktor Hovland became the first Cowboy to finish in the top 10 at the event since Ian Davis tied for eighth place at the Crabapple Course in Atlanta in 2013. The freshman posted a 75 on Monday to move up two spots into a tie for eighth place at 285.

Sophomore Hayden Wood closed with a 76 to move up one spot into a tie for 23rd place at 289.

Senior Zachary Olsen climbed three places into a tie for 47th place at at 295 after closing with a 78, while sophomore Zach Bauchou signed for his second consecutive 74 to get in with a 295 total as well.

Junior Kristoffer Ventura finished with a 299 total after signing for a closing 79 to finish tied for 65th place.

The Cowboys and Ducks will get their match underway at 7:50 a.m. Tuesday morning. Live scoring is available at golfstat.com. Golf Channel will begin its coverage at 10 a.m.

Overstreet made a surge on Monday,  finishing runner-up at Rich Harvest Farms for the second-best individual finish in program history.

Overstreet becomes the second player in school history to finish inside the top five at the National Championship, joining R.H. Sikes who won the program’s only National Title in 1963.

“What Mason accomplished this week is incredible,” said Arkansas head coach Brad McMakin. “He never lost focus or let the moment get to him. He is a special player and this is just the beginning of a great career.”

Entering the final round six shots off the lead, Overstreet quickly jumped into contention after birdies on two of the first three holes. As strong winds and high scores brought the leaders back to the field, Overstreet made the turn to the back nine just two shots off the lead and proceeded to hole out from the bunker for birdie on No. 10 to close the gap to one stroke.