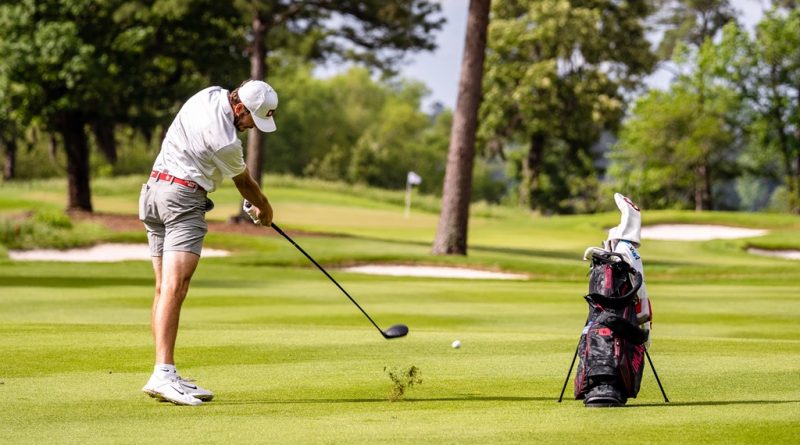 Above, OU’s Logan McAllister tees off

TRINITY, Texas – After Monday’s opening round was suspended, the Oklahoma men’s golf team resumed play at the Big 12 Championship on Tuesday, closing its first round and completing its second round to grab second place with one round to play. Oklahoma State also moved up the leaderboard and is just two shots behind the Sooners.

The top-ranked Sooners (2, -8) will enter Wednesday’s final round of the 54-hole championship one shot behind No. 9 Texas (1, -9) at the par-72, 7,434-yard Whispering Pines Golf Club. Individually, three Sooners are in the top five as the entire Oklahoma lineup is threatening for a top-10 placement. The championship’s top-10 finishers all earn a spot on the All-Tournament Team.

In the team race, the Sooners trailed the Longhorns by four shots as the teams made the turn, but after starting on the back nine, Oklahoma caught fire on the front to close its day. Birdies from the entire lineup erased the Longhorn’s deficit quickly, and Chris Gotterup’s birdie on No. 9 sent the Sooners into the clubhouse with a share of the lead at 8-under. However, Texas used a birdie from Cole Hammer to retake the lead heading into the final round.

Gotterup (T2, -4) led the Sooners in the first two rounds, leading for much of the second round before a late bogey moved him into third. The former Big Ten Player of the Year birdied his final hole to move back into a tie for second and one stroke back of Texas Tech’s Ludvig Aberg (1, -5), who leads after two rounds.

In his first appearance at the championship, Drew Goodman (T5, -2) is in line to earn a spot on the Big 12 All-Tournament Team after posting back-to-back 71s (-1) to sit in a tie for fourth. The Norman product owns seven top-20 placements, including a season-best runner-up finish at the Southern Highlands Collegiate this spring.

Tied with Goodman on the leaderboard is Stephen Campbell Jr., who matched his teammate’s back-to-back 71s (-1) Tuesday to post 2-under thru 36 holes. A redshirt freshman, Campbell Jr., is looking to secure his third top-10 finish of the season.

Sharing 13th place and hunting for spots on the All-Tournament Team were Patrick Welch and Logan McAllister, who closed their days with four pars and a birdie to each sneak into the top 15.

On Tuesday, Welch (T13, E) signed for a pair of even-par 72s, including a flawless back nine in the second round where the senior sunk two birdies and seven pars.

McAllister matched Welch with two rounds of 72 (E). The Oklahoma City product’s seven birdies were second most in the OU lineup, trailing Welch’s eight on the day.

Six players ranked in Golfstat’s top 25 sit inside the top 10 after 36 holes, with three more ranked inside the top 100. Texas (-9) leads the field with 18 holes outstanding, and the Sooners trail their rival by one stroke. On their tails is No. 2 Oklahoma State (-6) and No. 5 Texas Tech (-3), as TCU rounds out the top five at 9-over par.

“Tomorrow is going to be a battle against ourselves and nobody else,” Hybl added. “We have to stay in the moment with each shot and go play our type of golf. It’s going to be a grind for 18 holes.”

The Sooners will look to erase the one-shot deficit on Wednesday and claim the program’s 18th conference championship and first since 2018. Oklahoma will tee off at 9:30 a.m. CT off the first tee with the Longhorns in another showdown for the conference title.

The Cowboys completed half of their first round on Monday before inclement weather halted action for the day and reduced the event from 72 to 54 holes. OSU returned to the par-72, 7,434-yard layout Tuesday morning to finish off an opening 286.

The event’s No. 2 seed, OSU posted a 4-under 284 during its second round to finish at 6-under 570 and just two shots behind Oklahoma for second place.

Aman Gupta opened with a 72 before vaulting into a tie for second place with a 68 during his second round. The Cowboy senior stands at 4-under 140 and is just one shot off the pace of Texas Tech’s Ludvig Aberg.

Starting his second round on the back nine, Gupta birdied Nos. 10 and 11 before carding his lone bogey of the round at the 12th. He moved back to 2-under for the round with a birdie at the 15th. He would go bogey-free over his second nine with birdies at the second and ninth to get to his 4-under tally.

Joining Gupta in the top 10 were sophomore Bo Jin and senior Eugenio Chacarra, who finished the day among the group tied for ninth place at 143. Jin posted rounds of 72 and 71, while Chacarra signed for scores of 71 and 72.

Senior Rasmus Neergaard-Petersen carded a pair of 77s to finish the day tied for 39th place.

The Cowboys will get their final round underway today at 8:45 a.m. and will be paired with Texas Tech. Live scoring for the event is available at golfstat.com.