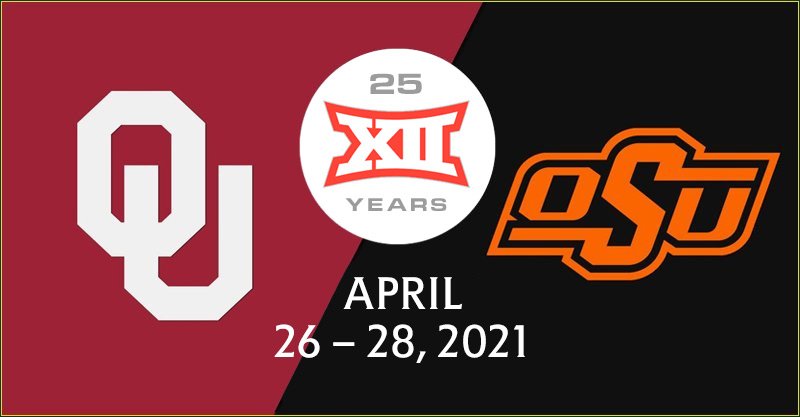 HUTCHINSON, Kan., — No. 1 Oklahoma and No. 3 Oklahoma State are set to square off Monday through Wednesday in the Big 12 Championship, hosted for the 13th time at Prairie Dunes Country Club in Hutchinson, Kan. The conference championship, which is contested over 72 holes of play, has been won by the Sooners 17 times and by the Cowboys 55 times, including 10 since the advent of the Big 12.

For top-ranked OU, coach Ryan Hybl’s team won the tournament in 2018 and has finished inside the top five at the last three championships.

“Our guys have so much respect for Prairie Dunes and understand how important of a course it is, and they’re excited to play it,” Hybl said. “We’ve put in the work all season with our focus and ultimate goals on the postseason, and it’s finally here. We’ll be ready to compete and have fun out there.”

The Sooners enter the week ranked as the consensus No. 1 team in the country, boasting four All-Americans and the four lowest scorers in program history. The six potential starters have amassed 46 top-10 individual finishes over their careers. Hybl’s team has earned a top-five finish in 23 of its last 24 finishes, including four wins this season in just eight 54-hole tournaments.

On the individual front, the Sooners’ roster features three medalists in McAllister, Reband and Welch this season, while Cummins owns a pair of runner-up finishes, Brightwell has two T4s and Lorenz has a T13. Oklahoma is the only team in the country to have four All-Americans and three players inside the PGA Tour U’s top 15 rankings. Five of Oklahoma’s potential six starters sit inside the top 85 in the world, powered by No. 6 Reband and No. 19 Cummins.

Championship 411
• The Cowboys will be the tournament’s No. 2 seed and will be grouped with top-seeded Oklahoma. The two teams will get their first round underway at 8 a.m. (CST) on Monday.
• The tournament will consist of 72 holes with 36 being played on Monday followed by 18-hole days on Tuesday and Wednesday. Pairings for the second day of play will be based on the 36-hole totals from Monday’s action. The final day’s pairings will be based on the 54-hole team totals with the leaders teeing off last.

OSU At the Big 12 Championship
The Cowboys have won 10 Big 12 crowns in the history of the event. OSU won three of the first four tournaments, finishing atop the leaderboard in 1997, 1998 and 2000. The Cowboys’ next league title came in 2005 before reeling off five-straight victories from 2007-2011. OSU claimed No. 10 in 2019 in the first-ever Big 12 Championship contested at The Greenbrier.

The Sooners own 17 conference championships, most recently taking home the title in 2018. An Oklahoma golfer has won the individual crown twice, as Hunter Haas won the championship in 2000 and Anthony Kim took home medalist honors in 2005. Current OU assistant coach Bill Allcorn, who played at Baylor in college, finished as the runner-up at the 2009 championship, also hosted at Prairie Dunes.

Pairings will consist of twosomes with play opening off the No. 1 and No. 10 tees in each of the four rounds. The top-ranked Sooners are matched up with No. 3 Oklahoma State on Monday, giving fans a Bedlam showdown at the conference championship.

Pairings for the first round are based off the most recent Sagarin ratings. The second round, also played on the opening day, will remain with the same pairings, with the starting tees will be switched. Pairings for the second and third days will be based on team results from the previous rounds.