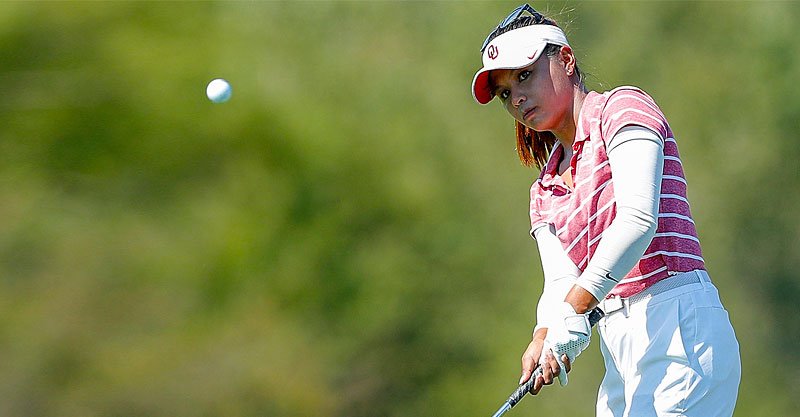 OU junior Mikhaela Fortuna closed her week at the Moon Golf Invitational with two birdies on her last four holes to move back under-par for the day and finish the event tied for 26th at 1-over. Her back-to-back rounds under par led the Sooners at the par-72, 6,383-yard Duran Golf Club to open the spring season.

The Sooners closed strong in Tuesday’s final round, carding eight birdies, an eagle and just one bogey over their last five holes to finish 13th at the fourth annual Moon Golf Invitational.

“We had a tough start today as a team, but we rallied coming down the stretch,” head coach Veronique Drouin-Luttrell said after the event. “We’ve had a lot of adversity thrown at us over the last couple of weeks and haven’t had the best practices, but we’ll keep working and get back to work and grow as a team.”

For Fortuna, a junior from Manila, her 71 (-1) was the 15th round under par of her OU career after firing a 69 (-3) on Monday afternoon. It’s the fourth time that Fortuna has led the Sooners at a tournament, after finishing atop the Sooners’ leaderboard three times as a sophomore.

Hannah Screen played another consistent round of golf on Tuesday, firing a 73 (+1) to finish T31 and 2-over across 54 holes. The London, England, product struggled on the front nine and sat at 5-over at the turn, but the No. 9 player in the country sunk two birdies and an eagle on the 17th green to get back to 1-over on the day.

Maria Fernanda Martinez (220, +4) got in on the late-round action, tallying four birdies over her last five holes to finish the event in a tie for 45th. Her career-high nine birdies powered her to a 54-hole score of 220, the third-lowest of her Oklahoma career.

Drouin-Luttrell’s squad is off until March 12-14, when it travels to Longbow Golf Club for the Clover Cup, an event the Sooners won in 2013 and 2018 and have earned medalist honors at three times.