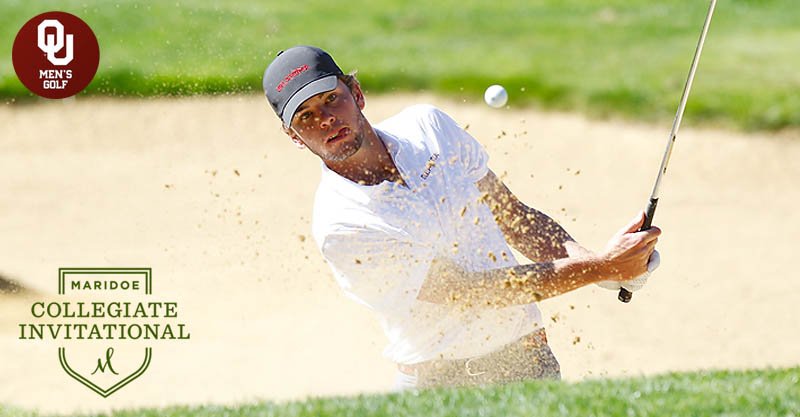 CARROLLTON, Texas — After 18 holes of play at the Maridoe Collegiate Invitational, the seventh-ranked Oklahoma men’s golf team holds a one-stroke lead over a field that features 13 teams that were ranked or received votes in the latest GCAA poll.

The Sooners (1, +2) fired a 290 as a group in Monday’s first round at the 54-hole tournament held annually at the par-72, 7,351-yard Maridoe Golf Club. Chris Gotterup powered the Crimson and Cream in the opening 18 and shares second after carding a 70 (-2), while Logan McAllister, Drew Goodman and Patrick Welch join him inside the top 20.

“Maridoe is such a challenge every time you play it,” head coach Ryan Hybl said. “Our guys did such a nice job getting around the course today and battling. Chris (Gotterup) hit one of the best 2-irons that you’ll ever see on No. 2 to a foot for eagle, and that really got him rolling. Logan (McAllister) played a perfect front nine for us. Drew (Goodman) really hung in tough all day. Hopefully we can limit our mistakes and take advantage of some opportunities tomorrow.”

Hunting the second win of his college career, Gotterup (T2, -2) started the day on a high note, sinking an eagle on the par-five second hole to claim an early lead. He closed his front nine with a pair of birdies and bogeys to take a 2-under card into the back at Maridoe. A birdie on the 11th paired with a bogey on 15 and seven pars sent the transfer from Rutgers into the clubhouse with a season-low 70 and his fourth round of par-or-better this season. If Gotterup can win the tournament, he’ll earn an exemption into the PGA Tour’s Houston Open in November.

McAllister (T13, +1) shared the lead with Gotterup at the turn after firing a clean 3-under 33 on the front. But a pair of bogeys and a double-bogey on No. 13 forced the Sooner to post a 1-over 73 as he shares 13th. The Oklahoma City, Okla., product is in line for the 12th top-20 finish of his career.

Freshman Drew Goodman (T13, +1) continued his run of stellar play to open his collegiate career Monday. After a top-10 finish at the Carmel Cup last week, the top-ranked Oklahoman in the 2021 recruiting class fired a 73 (+1) on Monday to share 13th with McAllister.

Redshirt freshman Stephen Campbell Jr. posted a 78 (+6) and owns a piece of 55th.

Live scoring is available on Golfstat, and Golf Channel will carry live coverage of Tuesday’s round from 3-6 p.m. CT.