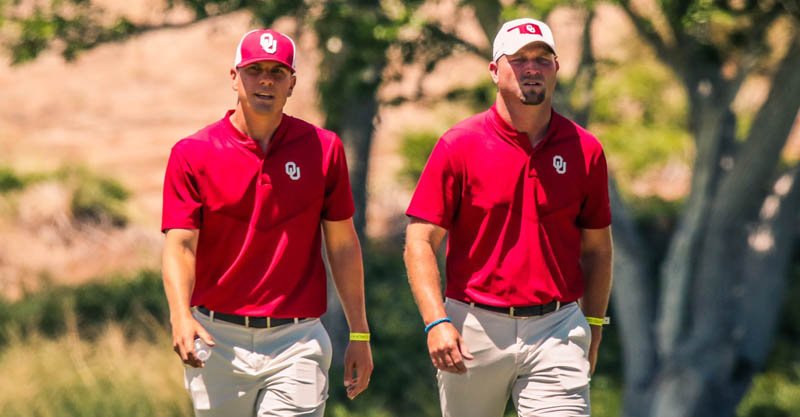 SCOTTSDALE, Ariz. — The Oklahoma men’s golf team is set to compete for its third national championship next week at Grayhawk Golf Club in Scottsdale, Ariz. The Sooners enter the championship as the No. 2 seed, but are ranked first by the GCAA Coaches Poll and Golfweek.

The Sooners completed a comeback on the final day of the Albuquerque Regional, jumping five spots in the last round to finish fourth and advance to the program’s 10th straight NCAA Championship. Oklahoma is the only team in the country to advance to the previous four NCAA Match Play Finals.

The championship will be contested over 72 holes of stroke play, with the field being cut from 30 to 15 after 54 holes. Following 72 holes, the field will be narrowed down to eight teams who will square off in a quarterfinal, semifinal and final match to determine a national champion.

Head coach Ryan Hybl led Oklahoma to the national championship in 2017, when the Crimson and Cream knocked off Baylor, Illinois and Oregon to win the program’s second-ever national title. Current Oklahoma senior Quade Cummins was the alternate on the 2017 team.

HOW WE GOT HERE

The Sooners jumped five spots up the leaderboard on the final day of the Albuquerque Regional to finish fourth and clinch a spot in its 10th straight NCAA Championship.

Jonathan Brightwell finished as the runner-up in Albuquerque, his best finish of the season. Four under-par rounds in the final round powered the Sooners’ comeback, highlighted by four birdies on the 18th hole. Oklahoma entered the postseason as the nation’s No. 1 overall seed, ranked as the nation’s consensus top team.

Following the canceled 2020 postseason due to the COVID-19 pandemic, Oklahoma’s four seniors, plus transfer Jonathan Brightwell, announced their intent to return to Oklahoma for a final season. Brightwell, Riley Casey, Quade Cummins, Thomas Johnson and Garett Reband have combined for 532 collegiate rounds played, led by Brightwell (157), Cummins (136) and Reband (120).

#CHAMPU TAKES OVER PGA TOUR U

No. 13 Jonathan Brightwell, No. 6 Quade Cummins and No. 5 Garett Reband all rank inside the top 15 of the May 26 PGA Tour U rankings, making Oklahoma the only school with three golfers inside the top 15. The three have produced 80 top-20 finishes paired with a combined 56 top 10s and 33 top fives, along with six All-America honors.

The top five finishers from the final official PGA TOUR U rankings will receive Korn Ferry Tour membership and will be exempt into all open, full-field events beginning the week following the conclusion of the NCAA Division I Men’s National Championship through the conclusion of the Korn Ferry Tour regular season. The top five finishers will also be exempt into the Final Stage of that year’s Korn Ferry Tour Qualifying Tournament. Players ranked 6-15 will gain status on an international tour.

The Oklahoma lineup has amassed 93 rounds of postseason golf, more than any other team in the country, and has combined for 67 top-10 finishes, 102 top 20s and eight wins over their careers. Five of the Sooners’ six potential golfers rank inside Golfweek/Sagarin’s top 35, powered by No. 15 Jonathan Brightwell.

Since Hybl arrived in 2009, Oklahoma has reemerged as a national powerhouse in men’s golf. The Sooners are one of three schools that have appeared in every NCAA Championship since 2011 and are the only program in the country to advance to match play at the championship every year since 2016, winning the national championship in 2017.

Oklahoma has an average national ranking of 4.65 over the last five seasons per Golfweek/Sagarin, the highest average ranking in the country by over two spots.

Ben Lorenz, FR, Peoria, Ariz. –  First appearance at NCAA Championship after subbing and playing two rounds at the Albuquerque Regional (74-70) … Best finish at Maridoe Collegiate in first collegiate event, shot 222 to finish T13 … Made first showing in lineup at Calusa Cup, where his second-round score of 71 helped pace the Sooners to a win … Was No. 1 prospect out of Arizona and No. 16 nationally, earning AJGA Player of the Year honors.

Logan McAllister, JR, Oklahoma City, Okla. – First NCAA Championship… Putting together the best season of his career, amassing a win at the Colonial Preview and two runner-up finishes this spring … Career-scoring average of 71.60 is third-lowest in Oklahoma history, and his career score versus par of 0.16 is second-best all-time in Norman … 11 rounds in the 60s this year are most on the team and his low round of 65 is the best among all Sooners in 2020-21 … September 2020 Big 12 Golfer of the Month.

Patrick Welch, JR, Aliso Viejo, Calif. (ALT) – Alternate for 2021 NCAA Championship, would be second appearance (2019) if he plays … Won the East Lake Cup in October 2020, firing a 67 … Career-scoring average of 71.69 is the fourth-best in program history … Honorable mention All-American as a freshman in 2019 … Won the drive, chip and putt competition at Augusta National in 2014.

The Raptor Course at Grayhawk Golf Club will be played at 7,289 yards and as a par-70 for the championship. The course, designed by Tom Fazio, opened in 1994 and is listed among the best public golf courses in Arizona by Golfweek and Golf Magazine. Raptor is one of only two Scottsdale golf courses to host a PGA TOUR event – the Frys.com Open 2007-2009. Other tour-sanctioned tournaments include the inaugural Williams World Challenge, Andersen Consulting World Championship of Golf and Waste Management Phoenix Open pro ams.

Oklahoma tees off in Friday’s first round with No. 1 Florida State and No. 3 Oklahoma State at 1:30 p.m. CT and then on Saturday at 8:10 a.m. CT with the Seminoles and Cowboys.

Golf Channel will provide live coverage at the final three days of the championship, showcasing the best collegiate golf in the country as the NCAA will crown and individual champion on Monday and a team champion on Wednesday.