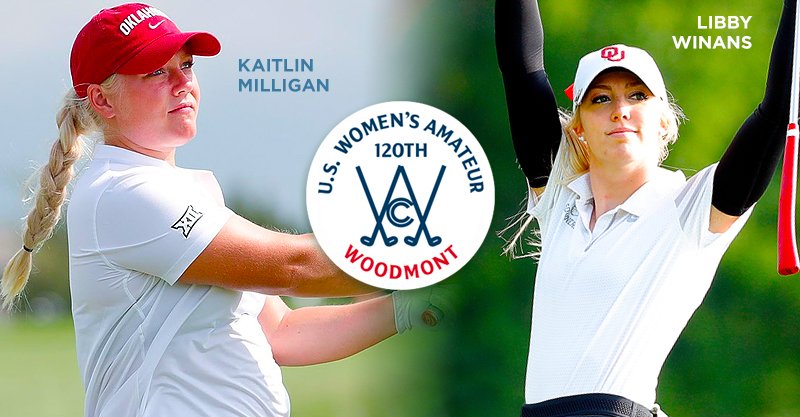 Oklahoma women’s golfers Kaitlin Milligan and Libby Winans are in Rockville, Md., this week for the 120th U.S. Women’s Amateur, the most prestigious amateur event in women’s golf. The tournament tees off on Monday morning and runs through Sunday.

The event, held this year at Woodmont Country Club, features 132 of the best amateur golfers in the world. The golfers will play 36 holes of stroke play before the field is cut to 64 and the bracket is set for match play, which will be broadcast nationally on the Golf Channel.

Milligan and Winans are two of the most decorated Sooner golfers in program history, appearing in the Oklahoma women’s golf record book over 50 times combined. The two own the No. 2 and No. 3 spots in career scoring average vs. par as Sooners, with Milligan carding a 1.08 vs. par and Winans firing a 1.22. The pair own the four lowest rounds in program history.

“I’m so excited and honored to be back at the Women’s Amateur,” Winans said. “It’s a huge tournament and the USGA puts it on so well. It’s exciting to be able to come and compete against some of the best competition that you can get. I’ve learned so much this past year, including that I need to just play with the game that I brought and to enjoy every second of it.”

For Winans, she makes her return to the Women’s Am, where she finished T22 in 2018 before falling in match play. The Richardson, Texas, native has shined as a Sooner on and off the course. As a freshman in 2018-19, she set the program record for the lowest freshman scoring average with a 72.59. She owns six top-10 finishes and three top-fives at Oklahoma, including a win at the 2019 Clover Cup.

Milligan, a senior from Norman, was crowned champion at the NCAA Norman Regional in 2019 and is ranked No. 58 in the Golfstat rankings. Her 2019-20 season scoring average of 71.40 is the lowest in OU history, as she continues to shine in the crimson and cream. She was named to Team USA’s Arnold Palmer Cup team and has accepted an invitation to play in the prestigious Augusta National Women’s Am preceding the Masters Tournament. The 2020 edition of the U.S. Amateur will be Milligan’s third consecutive appearance in the event.

“Just really excited to be here and I’m glad we can still have the event with everything going on,” Milligan said before her Sunday practice round. “I’m honored to be in the field considering there were no qualifying events because this is one of the most, if not the most, elite fields of the year. I’m excited to get out there and compete – it’s been too long!”

The two will tee off on Monday in round one at Woodmont with Milligan hitting the tee box at 12:30 p.m. CT and Winans at 11:30 a.m. CT. Live scoring can be found on the USGA website.