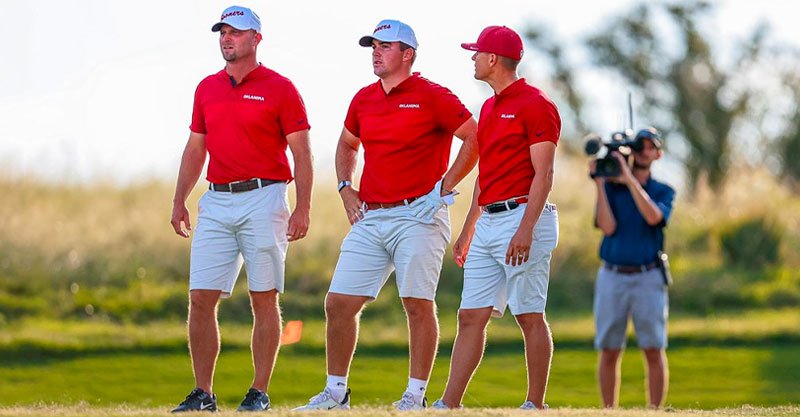 NORMAN — For the second consecutive season, the Oklahoma men’s golf team is the nation’s No. 1 overall seed. As a result, the Sooners will host the NCAA Norman Regional at Jimmie Austin OU Golf Club May 16-18, it was announced by the NCAA Division I Men’s Golf Committee.

The Sooners, who will make their 11th straight NCAA Regional appearance, will be one of 13 teams in action at the Jimmie Austin OU Golf Club in Norman.

“We’re obviously excited to host a regional at our home course,” head coach Ryan Hybl said. “The field is a great field that will test us and we’re excited for that opportunity. You don’t get into postseason play without being a great team, so we’re excited.”

Oklahoma, led by two golfers ranked inside the top five nationally, is the Big 12 champion and has secured six team victories this season, including a school-record tying five in the regular season. A total of three All-Americans, No. 1 Chris Gotterup, No. 4 Logan McAllister and No. 67 Patrick Welch, anchor the Oklahoma lineup.

The 13-team, 54-hole tournament is one of six NCAA Regionals and serves as the preliminary event for the NCAA Championship, which OU has advanced to every year since 2011. The low five teams and the low individual not on a qualifying team will go to the NCAA Championship, slated for May 27-June 1 at Grayhawk Golf Club in Scottsdale, Ariz.

Oklahoma is the winner of five NCAA Regionals in school history, including the 2018 NCAA Regional at the Jimmie Austin OU Golf Club, paired with titles in 1989, 1995, 2001 and 2015. Most recently, the Sooners finished fourth at the 2021 NCAA Albuquerque Regional and advanced to their 11th consecutive NCAA Championship. In addition, Oklahoma is the only school in the country to appear in the last five NCAA Match Play Quarterfinals and won the 2017 national championship.

Tee times for the regional will be available closer to the competition, and fans are encouraged to come to Jimmie Austin for the tournament as admission is free. Live scoring will be provided for the event through Golfstat.