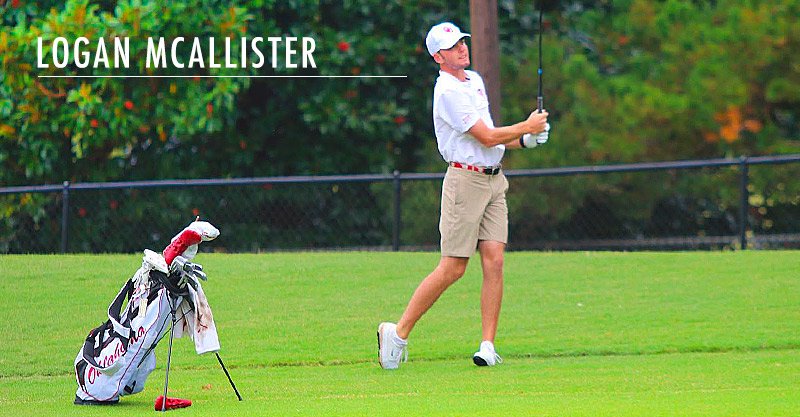 ATLANTA – The top-ranked and No. 1-seeded Oklahoma men’s golf team erased a two-match deficit on the back nine to defeat No. 4-seeded Texas, 3-2, in the semifinals of the East Lake Cup on Tuesday. The Sooners will take on No. 2-seeded Pepperdine in the championship at 8:40 A.M. ET on Wednesday.

Trailing 2-0 thru 13 holes, the Sooners’ chances may have appeared bleak to the outside world coming down the stretch. Facing defeat if any of their three golfers left on the course faltered, head coach Ryan Hybl’s team went on a heater.

“I wouldn’t expect that to have gone any differently. It’s OU and Texas,” Hybl said after the round. “At the end of the day it’s a race to three points and that’s what it’s going to be like tomorrow against a really talented Pepperdine team. We’re excited to pick up a win today over Texas.”

Logan McAllister held off a surging Parker Coody on the playoff 19th hole to secure the Sooners’ first point of the day. Then Jonathan Brightwell won on 15 and 16 to even things up, before winning on a dramatic playoff hole to even the match at two-a-piece. Oklahoma anchor Quade Cummins then won holes 14 and 15 to take a 2-up lead into 16, where he lost, moving his match with Texas’ Cristoffer Bring to 1-up. As those two came down the 18th fairway, Cummins knew what was at stake.

“I knew that we were tied and I just needed to halve the hole for us to advance,” Cummins said. “Coach Hybl looked at me before I took my second shot and just told me ‘This is why you came back.'”

Cummins would then send that second shot about 20 yards left of the green and into some of the deepest rough on the course.

But a strong chip and putt, paired with Bring also finding the bunker and rough, pushed Cummins past Bring and the Sooners into the East Lake Cup final versus No. 2 Pepperdine.

“Quade was special down the stretch and was awesome on 18, making sure that he made his opponent make something happen,” Hybl said. “John Brightwell did a great job, sealing the deal on his 19th hole and Logan McAllister went out for us early and got a point.”

Garett Reband and Patrick Welch, the individual champion on Monday, both fell 5&4 in their matches.

The Sooners now turn their focus to a Wednesday-morning showdown with No. 2 Pepperdine, a match that some say is an NCAA championship preview.

“It’s going to be a fun match tomorrow for the title,” Cummins said. “It’s probably a good bet that this could be the national championship match come next June.”

Texas Tech freshman JP Roller of Jenks won his match Tuesday against Pepperdine’s No. 1 player William Mouw 2 and 1. The Red Raiders lost the match 3-2, but coach Greg Sands was impressed with Roller and fellow freshman Baard Skogen who provided the two victories.

“It’s always close in match play,”  Sands said. “I’m just really proud of the two freshmen who won their matches. That was a great experience for them. They showed a lot of heart out there. There were some, yeah, a little bit of gamesmanship on their part and they didn’t back down, especially in my match. Just so that was the one I was with, with JP, and loved how he responded to that and really faced the challenge. He hit some great shots down the stretch.”