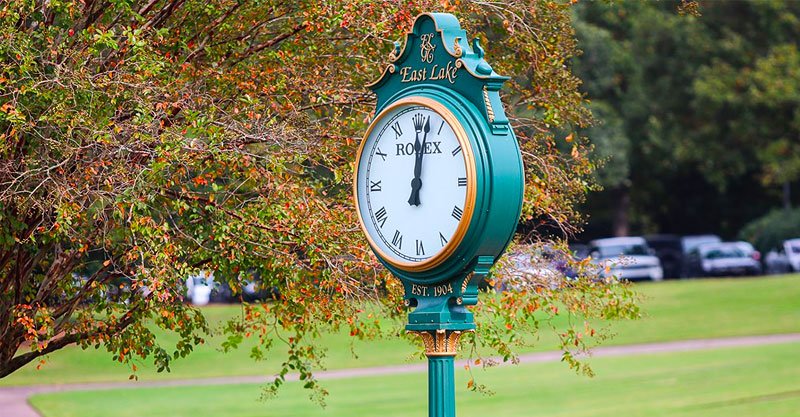 ATLANTA – The top-ranked Oklahoma men’s golf team is set to open the East Lake Cup on Monday morning at the par-72 East Lake Golf Club in Atlanta. The Sooners were selected to compete in the prestigious event after a 2019-20 season that saw head coach Ryan Hybl’s team compile a pair of wins and top three-finishes at five of their six events.

The East Lake Cup was founded in 2015 to provide the nation’s top teams with an avenue to compete in an NCAA-style event. The Cup features the top four teams on both the men’s and women’s side, as teams play 18 holes of stroke play, followed by a semifinal and final of match play on Tuesday and Wednesday. Live coverage will be broadcast daily from 2-5 p.m. CT on the Golf Channel.

Using the final rankings from the 2019-20 season, the East Lake Cup chose then-No. 1 Pepperdine, No. 2 Oklahoma, No. 3 Texas Tech and No. 4 Texas on the men’s side. Through three fall events, the Sooners have overtaken the ranking’s top spot after winning at Colonial and finishing in third at the Big 12 Match Play Championship and Maridoe Collegiate Invitational.

“Whenever you get to a place like East Lake your goal and expectation is to win,” Hybl said. “Our goal is to win in stroke play on Monday and then get ready to go for match play. We’ll get to where we need to be, because these guys are a veteran group with a lot of experience, and they came here to win.”

An individual medalist will be crowned on Monday after the 18 holes of stroke play and team titles will be decided on Wednesday.

The Sooners’ lineup of five features four All-American honorees and three players ranked inside the top 10.

Quade Cummins will look to lead the Sooners once again, the All-American has finished inside the top 10 in each event this year, leading to a national ranking of No. 2. The redshirt senior from Weatherford, Okla., hasn’t finished outside of the top 20 since his junior season.

Cummins is followed in the lineup by junior Logan McAllister who has burst onto the scene in 2020. McAllister enters the week ranked fourth in the country after notching medalist honors at Colonial in September.

Johnathan Brightwell will look to continue his hot start for the Sooners. The UNC-Greensboro transfer is ranked seventh nationally by Golfweek and was a 2020 PING All-American. His T6 finish at Colonial and T13 placement at Maridoe have the Charlotte, N.C., product primed for another strong event.

Junior Patrick Welch is set to make his East Lake debut after opening his season with T19 and T21 finishes. The Providence, R.I., native possesses the second-lowest scoring average versus par in OU history, and has been a steady force in the Oklahoma lineup, earning All-America honorable mention honors his freshman season.

Rounding out the Oklahoma lineup is All-American and Haskins Award Watch List honoree Garett Reband. His appearance in Atlanta will mark the first action for Reband in stroke play this season, as he competed for the Sooners at Big 12 Match Play.

Notes: Freshman JP Roller of Jenks will start for No. 6 Texas Tech, which has seen a shakeup in its lineup due to COVID-19. It will be his first appearance in stroke play, he played one match in the Big 12 Match Play.

The Tom Cousins Award is an annual recognition at the East Lake Cup, presented to an outstanding male and female golfer who exemplify the values of the East Lake Foundation: exceling in academics and engagement in his or her community. The award – presented on Monday night of tournament week – is named for Atlanta philanthropist Tom Cousins, founder of the East Lake Foundation, who led the transformation of a community in despair into a thriving neighborhood which has become a national model for community redevelopment through Purpose Built Communities.

Logan McAllister, Junior: Has finished inside the top 20 at his last four events, notching a pair of wins … Went 5-0 at Big 12 Match Play in early October … Big 12 Golfer of the Month in September … Ranked No. 4 in latest Golfweek/Sagarin ranking.

Jonathan Brightwell, Redshirt Senior: Transferred from UNC-Greensboro at end of 2019-20 season … Finished T6 in OU debut at Colonial and T13 at Maridoe … 4-1 record at Big 12 Match Play … Three collegiate wins in career … 2020 PING Second Team All-American … No. 7 in Golfweek/Sagarin ranking and No. 13 in Golfstat.

Garett Reband, Redshirt Senior: Making 2020 debut in stroke play … Competed at the Big 12 Match Play championship, going 1-3 … 2019 and 2020 PING All-American … Named to 2020 Haskins Watch List … Owns lowest scoring avg. vs. par in Oklahoma history (-0.15) … Trail only Cummins with 62 rounds of par or better in career … Has not finished over-par at an event since the 2019 NCAA Championships.

The par-72 East Lake Golf Club is a staple in the golf world, hosting the PGA Tour Championship every year since 2004, in addition to the 1963 Ryder Cup and 2001 U.S. Amateur.

Hybl on the course: “It’s one of those golf courses that is such a traditional and classic golf course. Pars still do a really good job out here, and you’ve got to hit the ball in the fairway off the tee box. You have to keep the ball above the hole. Stuff that you would normally see at classic courses is certainly what you have to do here at East Lake.”

Monday: Partly sunny with a high of 72 and low winds out of the east.

Tuesday: Sunny with a high of 78 with low winds.

Wednesday: Isolated showers with a chance of thunderstorm and light wind.

Tee times will be announced on Sunday afternoon, and published on Golfstat and the OU men’s golf social media accounts.

The East Lake Cup will be broadcast nationally on the Golf Channel from 2-5 p.m. CT Monday-Wednesday.