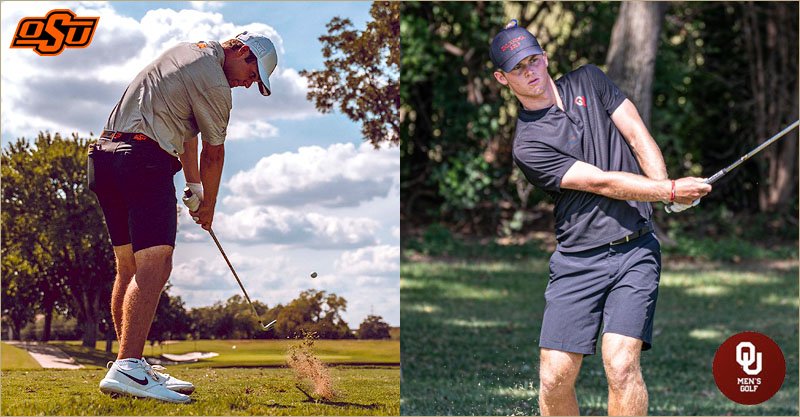 FORT WORTH — No. 1-ranked Oklahoma shot rounds of 273 (-7) and 290 (+10) to claim a share of second with Wake Forest on Monday at the Colonial Collegiate Invitational. No. 2 Oklahoma State is one shot behind the Sooners in fourth place.

Jaxon Dowell led the way in his collegiate debut, signing for a 3-under 67 and 72, good for a piece of fourth. The redshirt freshman is joined by redshirt senior Chris Gotterup, whose 68-71 moved him into a tie with the redshirt freshman following 36 holes at the par-70, 7,204-yard Colonial Country Club.

As a team, the Sooners sit two shots back of first-place Pepperdine (+1, 561) and are five shots clear of fifth entering Tuesday’s final round.

Dowell opened his day with an opening-round 67, as he played the final 16 holes 4-under par to get into contention. The Edmond product made the turn in round two as the solo leader and trails Michael Brennan (1, -6) of Wake Forest by five strokes.

Joining Dowell inside the top five was Chris Gotterup (T4, -1), who is in line to notch his second top-five finish in as many tries. The All-American collected rounds of 68 (-2) and 71 (+1) Monday and shares fourth with the redshirt freshman.

Logan McAllister closed the day with a birdie in his second round to card a pair of 71s (+1) and sits 18th with 18 holes to go. The senior was steady once again for OU, posting 24 pars on the day, second most for the Crimson and Cream.

Drew Goodman (T31, +5) took an early lead Monday at Colonial, posting three consecutive birdies to open his week en route to a 67 (-3) in the morning. But a 78 (+8) in the afternoon wave pushed the freshman into a tie for 31st.

Rounding out the Oklahoma lineup was Patrick Welch (72, +15).

The Sooners will look to defend their 2021 team title at Colonial Tuesday and secure the 45th program victory all-time. OU tees off Tuesday at 9:30 a.m. CT with Pepperdine and Wake Forest, with the final group going out at 10:06. Live scoring will be available on Golfstat.

Oklahoma State posted a 36-hole total of 4-over 564 on Monday at the Colonial Collegiate Invitational to stand in fourth place at Colonial Country Club.

The Cowboys opened with a 283 morning round before posting the low round of the afternoon, a 1-over-par 281, to climb two spots into the No. 4 slot. OSU finished the day one shot behind Oklahoma and Wake Forest for second place at the par-70, 7,204-yard layout. Pepperdine paced the field with a 561 total.

Wake Forest’s Michael Brennan tallied a 6-under total of 134 to lead the individual race.

Senior Aman Gupta led the OSU starting five after carding rounds of 69 and 71 to stand at 140 and tied for eighth place.

Joining Stark at 141 was senior Rasmus Neergaard-Petersen, who opened with a 72 before finishing the day with a 69.

After playing the weekend at the PGA Tour’s Sanderson Farms Championship, senior Eugenio Chacarra wrapped up the first day tied for 21st place at 143 with rounds of 72 and 71.

The Cowboys will begin their final round tomorrow at 8:45 a.m. and will be grouped with Texas and Stanford. Live scoring is available at golfstat.com.