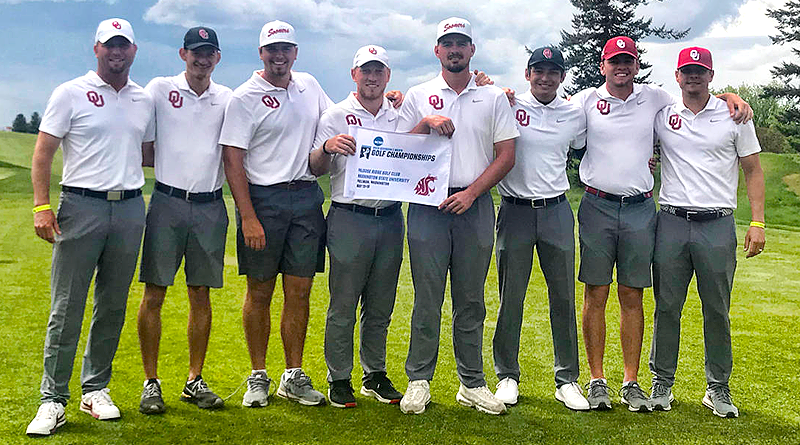 The No. 5 Oklahoma men’s golf team placed third at the NCAA Pullman Regional on Wednesday to advance to its ninth consecutive NCAA Championships.

The Sooners set a school record, posting the lowest 54-hole total in program history at 30-under 810 to claim their eighth straight top-three finish. OU posted a team total of 10-under 270 for the third straight day, matching the school record for the lowest round in a postseason event.

“This never gets old and the guys did a great job this week,” OU head coach Ryan Hybl said. “Blaine Hale had one of his best weeks in college golf and he did a great job. Everyone pitched in this week and it was a great team effort for us to advance.”

Joining the Sooners from the NCAA Pullman Regional at NCAAs will be No. 2 seed Georgia Tech, No. 3 seed South Carolina, No. 4 seed Texas A&M and No. 6 seed BYU.

Texas A&M won the team title with a three-day 33-under 807, followed by BYU in second place at 809. Georgia Tech finished eight strokes behind the Sooners, carding a three-round 818 to take fourth. After both teams completed 54 holes at 21-under 819, South Carolina bested Colorado State in a playoff for the final spot to advance to the NCAA Championships.

Individually, senior Blaine Hale led the Sooners as the senior finished tied for third place at 12-under 198. Hale opened the day with back-to-back birdies and carded a 68 in the final round. The senior’s three-round 198 is Hale’s lowest 54-hole total in his career and is tied for the third-lowest total in program history.

The Dallas, Texas, native picked up his second top-five finish of the season as Hale matched the lowest 54-hole total by a Sooner at a NCAA Regional event in school history.

Junior Garett Reband logged his seventh top-20 finish of the year, recording a 68 on the final day of action. Reband finished 11th at 202 and picked up four birdies during Wednesday’s round.
Redshirt junior Quade Cummins tied for 12th place with a three-day 203. The Weatherford, Okla., native carded five birdies during his round and posted a 67 to earn his 13th round in the 60s this season.

Senior Brad Dalke and freshman Patrick Welch shared 33rd place at 208. Dalke played well down the stretch, recording three birdies on the back nine Wednesday to finish with a 68. Playing in his first NCAA Regional, Welch turned in his best round of the week on the final day of action with a 67
.
The 30-team NCAA Championships are scheduled for May 24-29 at The Blessing Golf Club in Fayetteville, Ark.