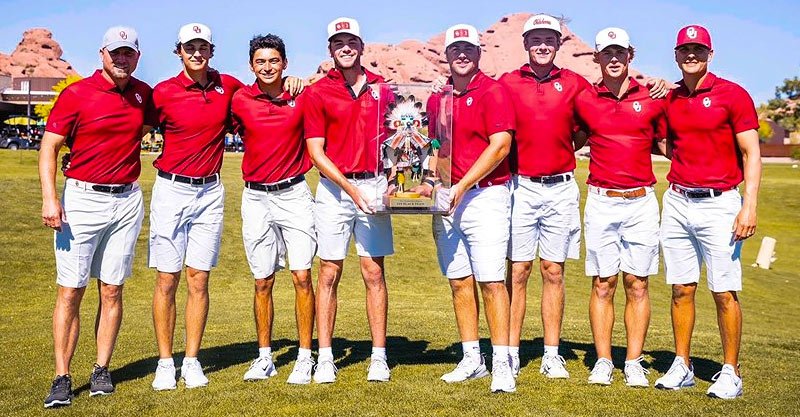 TEMPE, Ariz. — Powered by a comeback in Saturday’s final round, the top-ranked Oklahoma men’s golf won the Thunderbird Collegiate by five strokes and clinched a school-record tying fifth win of the season.

“Just a great team win,” head coach Ryan Hybl said. “Everyone pitched in this week and we felt good as an entire squad all week long. It’s very difficult to come to someone else’s home course and beat them. We’re fortunate to have been able to get the job done against some really good teams.”

Oklahoma entered the day two back of the Sun Devils, who enjoyed the comforts of their home course all weekend. The ASU lead grew to four on the front nine before the Sooners stormed back around the turn as All-Americans Chris Gotterup and Logan McAllister found birdies on No. 9 to turn the tide and power OU to the top of the leaderboard. The entire Crimson and Cream lineup turned it into high gear on the back nine, firing four birdies without a bogey over the next five holes to extend the lead to five strokes. A late charge from the Sun Devils was fended off by Gotterup and McAllister, who both birdied No. 16 to clinch the victory.

“It was an awesome week with the guys,” Gotterup said. “This was a much needed week to get some momentum going into the postseason. We got rounds from everyone and I really like that direction we’re trending as a team. Everyone still has work to do but this is a great start as we get the postseason going.”

Gotterup (T4, -11) fired the second-lowest round of the day Saturday, signing for a 65 (-6) with eight birdies at the par-71, 7,317-yard course. The redshirt senior finished his week at 11-under par to grab his fifth top-five finish of the season as he makes his case to win both the Ben Hogan and Haskins award.

“My round was solid today,” Gotterup added. “I really had it going all day and just had a few silly bogeys but I made enough birdies to make up for it. It was nice to get some momentum for myself as well as we head into postseason.”

Logan McAllister (T9, -8) joined Gotterup inside the top-10 as the nation’s best one-two punch continued to elevate OU to the top. The Oklahoma City product, who joined Gotterup on the national watch lists this week, used three rounds in the 60s, including a 68 (-3) Saturday, to share ninth at the event and collect his fourth top-10 finish of the season. The senior signed for a clean card with three birdies in the final round.

Redshirt freshman Stephen Campbell Jr. (16, -4) closed his weekend with back-to-back 69s (-3) to move into the top 20 and claim solo 16th at the tournament. The Richmond, Texas, product poured in back-to-back birdies to open his round and then again on Nos. 14 and 15 to extend the OU lead.

The Sooners led the field on par 4s for the week, firing an astonishing 20-under par on such holes, six shots better than Texas Tech. Hybl’s team sunk a field-high 177 pars while posting 60 birdies, suitable for second-most in the field.

No. 1 Oklahoma’s regular season featured wins at the Maridoe Collegiate and East Lake Cup in the fall, followed by wins in Puerto Rico, the Southern Highlands Collegiate and Thunderbird Collegiate in the spring. Although the five wins only ties the 2018 and 2021 teams, the 2022 squad reached five victories in just eight countable events, four and five fewer than its co-record holders. Hybl, now in his 12th year in Norman, has 34 career wins in his career with 10 coming in the last two seasons. This year’s team is in line to shatter the program’s scoring record vs. par and entered the week at -7.47 vs. par on the season, more than a half stroke better than the previous record. The spring has been one to remember for the Sooners as they’ve posted 25-under par or better in four of their five tournaments, including a school-record 59-under at the Puerto Rico Classic in February.

The Sooners now turn their attention to the Big 12 Championship, slated for April 25-27 at Whispering Pines Golf Club in Trinity, Texas. Oklahoma will square off with some of the nation’s best in No. 2 Oklahoma State, No. 7 Texas Tech and No. 9 Texas, as well as five other top-80 teams in the country.

Oklahoma State losed with an even-par 284 on Saturday at the Thunderbird Invitational to finish in fourth place at Papago Golf Course.

The Cowboys finished with a 54-hole total of 16-under 836 at the par-71, 7,317-yard layout to come in six shots behind Texas Tech for third place. Rasmus Neergaard-Petersen earned a top 10 for the Pokes, finishing at 8-under 205 and tied for ninth place. The showing marked the second time the senior has finished among the top 10 this spring and was his first since winning the General Hackler Championship in March.

Sophomore Jonas Baumgartner and senior Leo Oyo, who were both competing individually, shared 17th place after finishing at 3-under 210. Baumgartner closed with a 69, while Oyo posted a 70 during his final round.

Junior Dillon Stewart also competed unattached and finished with a 72 to get in with a 212 total and tied for 22nd place.

Senior Aman Gupta also finished at 212 after signing for a 78 on Saturday.

Junior Brian Stark carded his third consecutive 71 to finish tied for 27th place at 213, while sophomore Bo Jin was a stroke back at 214 after posting a 71 of his own to tie for 32nd place.

Senior Eugenio Chacarra tied for 40th place at 215 after closing with a 74.

Junior Rayhan Thomas competed individually as well, tying for 53rd place at 217 with a 73 rounding out his tournament.