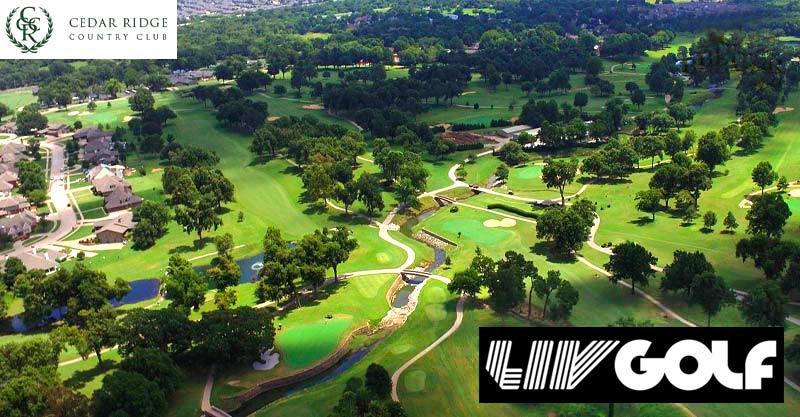 LIV Golf will host one of its 14 2023 events at Cedar Ridge Country Club in Broken Arrow, according to several sources. The dates are May 12-14.

Sam Humphreys of the 73rd Hole Podcast and The Sports Animal in Oklahoma City tweeted that he had received confirmation from a source familiar with LIV operations. Since then Golf Oklahoma has confirmed with several other sources that negotiations are close to complete. Nothing official will be announced until LIV Golf releases its 2023 schedule on Dec. 5.

Charles Howell, a LIV golfer who played collegiately at Oklahoma State, has been contacting various courses in Oklahoma to explore the possibility of bringing LIV to Oklahoma. He said today there was no definite contract signed with a course in Oklahoma but also confirmed that he was confident an Oklahoma destination would be announced.

Six players of the current 48-man LIV fields have strong Oklahoma ties, including five who played at Oklahoma State (Howell, Talor Gooch, Matthew Wolff, Eugenio Chacarra and Peter Uihlein) and one at the University of Oklahoma (Abraham Ancer).

It is known LIV contacted Oak Tree National in Edmond, Gaillardia Country Club in Oklahoma City, and the Golf Club of Oklahoma in Broken Arrow among others in researching possible venues.

“We talked to a lot of venues in Oklahoma,” Howell said “It’s a special place. Six of the 48 players on LIV played college golf there. That’s all I can say right now. I don’t want to be coy with you but I know we’re all excited to see how it all looks and shapes out.”

Cedar Ridge General Manager Cleve Stubblefield and Director of Golf David Bryan both told Golf Oklahoma they could have no comment on any potential negotiations with LIV Golf at this time.

Cedar Ridge president Billy Lowry sent an email to members letting them know the board was negotiating with LIV.

“We have been contacted by LIV Golf as a possible tournament site for 2023, as of right now nothing has been finalized with LIV. The board has met and is actively engaged in the process,” the memo read in part. ” As this opportunity further develops, I look forward to giving the membership an update.”

Cedar Ridge member Chris Noel said he had heard about the negotiations and hoped they would be confirmed.

“I think it would be a great opportunity for the club,” said Noel, a former University of Tulsa golfer and a past club champion. “It’s not a political deal, it’s a golf tournament. We have various political opinions all across the state and in the club, but golf is something we all can agree on. This is a great opportunity to advance our club and showcase what we’ve got here.”

The political references are to LIV’s controversial funding by the Saudi Arabian Public Investment Fund (worth over $620 billion), which allows it to pay millions in guaranteed contracts to the top draws in its field and far more in purses to its players than the PGA Tour.  Saudi Arabia has been heavily criticized for its wretched record on human rights and LIV Golf has been accused of being a sports washing venture for Saudi Arabia Crown Prince Mohammad bin Salman Al Saud.

Some of the top LIV players who have signed up for contracts reportedly up to $120 million are Dustin Johnson, Cam Smith, Brooks Koepka, Bryson DeChambeau and Phil Mickelson. LIV Golf events are 54 holes with shotgun starts featuring team and individual play. In other contrasts with the PGA Tour, players can wear shorts and loud music is played at certain venues. LIV played eight events in its inaugural season in 2022.

Cedar Ridge, designed by Joe Finger and opened in 1969,  has long been recognized as one of the top golf venues in Oklahoma and a home to numerous Oklahoma Golf Association and state high school championship events. It hosted the 1983 U.S. Women’s Open Championship won by Jan Stephenson by one stroke over Patty Shehan and JoAnne Carner and was the site of an LPGA event from 2004 to 2009, won twice by Annika Sorenstam (2004-2005) and once each by Cristie Kerr (2006), Mi Huyn Kim (2007) and Paula Creamer (2008).