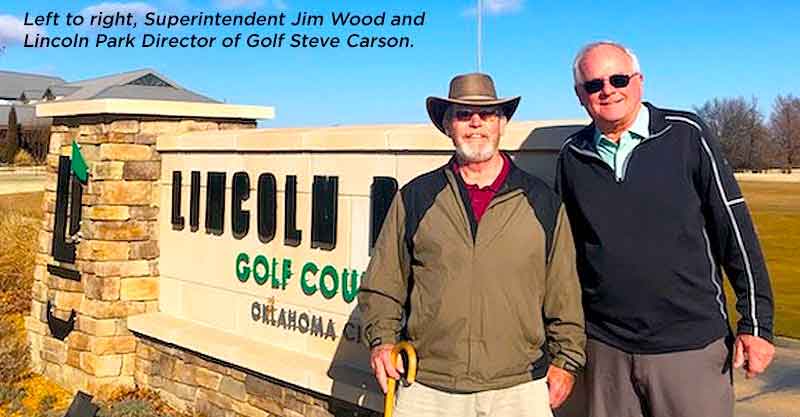 Two ultra successful golf course superintendents will be among the first four inductees into the new Oklahoma Golf Course Superintendents Hall of Fame in a ceremony Friday night at Belmar Golf Club in Norman.

Jim Wood, who set the standard in Oklahoma for conditions at public golf during his tenure at Lincoln Park from 1998 to 2019, and Craig Elms, who did much the same at private clubs during an outstanding tenure at Oklahoma City Golf & Country Club, are the two superintendents in the class.

Also being inducted is Dr. Greg Bell, a emeritus professor in turfgrass research at Oklahoma State University who was inducted into the Oklahoma Turfgrass Hall of Fame in 2014, and Larry Lindsey, a longtime rep for Winfield Solutions and other turfcare products.

Wood came to Lincoln Park after an ownership change at Oak Tree National. Oak Tree’s loss was a gift to Oklahoma City public golfers for the next 21 years.

“I couldn’t have asked for a better superintendent,” said Steve Carson, Lincoln Park’s former director of golf who hired him in 1998. “He was the epitome of the dedicated golf course superintendent. The way he supervised his people, The way he had his finger on the pulse of everything to do with our rebuilds of the East and West courses. His vast knowledge.”

Golf course architect Randy Heckenkemper worked with Woods on both the West and East course rebuilds and still marvels at his command of turfgrass, construction, resource distribution and more.

“Jim was always so calm and collected throughout the whole process and his grow-in on the greens on the West Course was phenomenal,” Heckenkemper said. “Frankly, he just set the bar for municipal golf in Oklahoma and all the time he was there every other course in the state was bench marked against how its conditions compared to Lincoln Park. I’ve taken so many different park directors over the years to Lincoln Park to see how good they can aspire to have their conditions be.”

Elms was the superintendent at the Perry Maxwell designed Oklahoma City Golf & Country Club from 1975 to 2014 and was inducted into the Oklahoma Turfgrass Research Hall of Fame in 2014.

The dinner is from 6 p.m. to 10 p.m. and cost is $50. For ticket information, email Dawn Coleman at secretary@okgcsa.com.