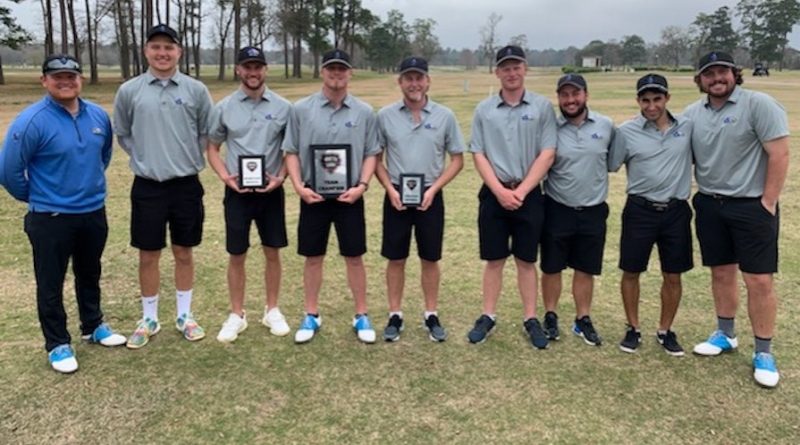 Southwestern Christian saw all 5 golfers finish top-ten, as well as a fourth place finish from individual competitor Tristen Dunn. Leonardo Ruggieri paced the Eagles after a 3-under 69 that included a hole-in-one on the par-3 14th. His three-round total of 217 (+1) would be good for second overall at the tournament.

Emiel Van Geet was not far behind with a third place finish and a 6-over 222. He led the tournament with 42 pars. Julian Alanis was the other Eagle in the top-5, shooting 228 on his way to fifth place finish.

rounded out the scoring for SCU as Trotta would notch a 234-T8 finish and Reed was right behind at 236-10 finish.

As Southwestern Christian continues to win, it has moved up to its highest ranking in school history. It is currently 15th in the NAIA poll and 13th in the Bushnell Golfweek Poll.

OCU’s Meyers, a senior from Johannesburg, South Africa, secured the win in his third consecutive start as well as his eighth career victory. The Stars, ranked No. 8 in NAIA men’s golf according to the GolfweekGolf Coaches Association of America ratings, collected second place as a team.

Meyers won the tournament with a 71-69-67–207 while draining 15 birdies to top the field. Meyers built a 10-shot margin of victory. Meyers owns a string of eight consecutive rounds under par and 11 top-five finishes in a row. His score dipped below 70 for the eighth time in 10 rounds this season.

With the win, Meyers moved into second place by himself on OCU’s career victory list. Meyers surpassed Tyrone Van Aswegen, who had seven wins from 2000-04, and stands behind Rupert Kaminski, who posted nine victories from 2015-18. Van Aswegen made the PGA TOUR in 2013. All three are from Johannesburg, South Africa.

The conditions included temperatures in the lower 70s with little wind.

The Stars compete next in the Texas Intercollegiate on March 8-9 at Hawks Creek Golf Club in Westworth Village, Texas.