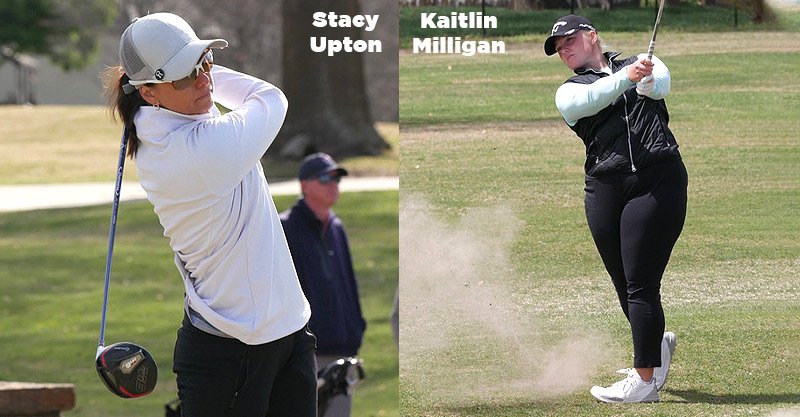 Shaking off the competitive cobwebs after nine years of seldom touching a club, Stacy Upton (Prammansudh) shot a 4-over 76 in the first round of the FCA Women’s Championship at The Club at Indian Springs Tuesday.

That left her in a tie for 25th and right on the cutline. The field will be cut to the low 34 players and ties after 36 holes.

Jody LaBarbera of Allen, Texas, is the leader at 5-under, a shot ahead of Greta Isabella Voker of Davenport, Fla., at 4-under. Five players in the field broke par on a cool blustery day.

Former University of Oklahoma golfer Valerie Tanguay is tied for 19th at 3-over while fellow former Sooner Kaitlin Milligan of Goldsby is tied with Upton at 4-over.

Upton shot even-par 36 on her front nine and was just 1-over after stuffing her approach to about 4 feet on the par-4 14th hole. But she had a double bogey on the par-5 15th when her third shot clipped a tree and landed in a creek, then bogeyed the par-3 16th as well before finishing with two pars.

Upton is scheduled to play her second round at 1:24 p.m. today weather permitting. The field is playing for a total purse of $44,000 with $10,000 to the winner. Most of the field is composed of recent college players looking to earn status on the Epson Tour and eventually LPGA Tour, which Upton played on from 2004-13, winning twice.

Her son Ryp is expected to caddie for her today. He was in school as she played Tuesday morning, so mother Brenda took over the caddie duties while father Lou walked with her as well.