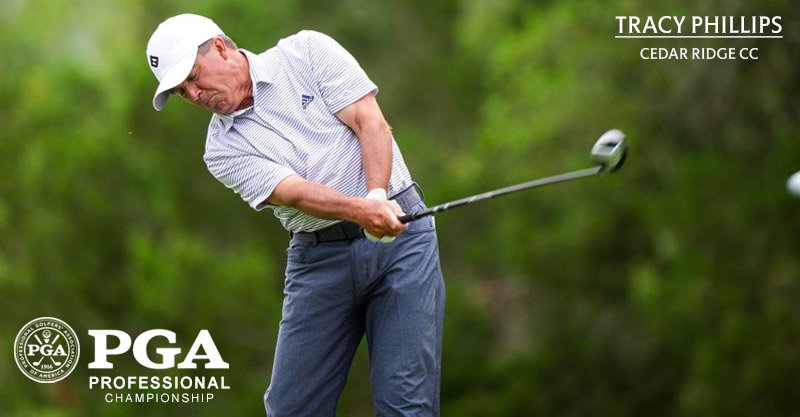 AUSTIN, Texas (April 19, 2022) 一 Tracy Phillips, a long-time teaching professional in Tulsa, is on the verge of achieving a monumental personal goal of earning a berth in the 2022 PGA Championship at Southern Hills Country Club in Tulsa.

With his second consecutive round of even-par 71, Phillips is in 13th place at 4-under through three rounds of the PGA Professional Championship at Omni Barton Creek Resort & Spa. The top 20 after today’s final round earn berths in the PGA of America’s major championship field.

Cary Cozby, director of golf at Southern Hills Country Club, who was granted an exemption to play in the 2021 Kitchenaid Senior PGA Championship at Southern Hills last May, said it would be “incredibly cool” if Phillips were to earn a spot in the field

“It would be incredibly cool!” Cozby said. “Just knowing him, his playing career and incredible accomplishments, the hometown kid playing at Southern Hills…couldn’t write it any better! Pulling hard for TP today”

The leader through 54 holes is  Jesse Mueller, who left the pack in the dust by recording a 5-under-par 66 on the Fazio Foothills Course Tuesday. He enters the final round with a five-shot cushion.

Casey Pyne (204) birdied the 18th to sit in solo second, while Michael Block, Colin Inglis and Kyle Mendoza are six back at 205. Nine players in all are within seven shots of Mueller.

Two other Oklahoma professionals who made the 36-hole cut did not advance to the final round. Southern Hills assistant Cameron Chhim, at 25 the youngest player in the field, shot a 75 in the third round and missed the final cut by a shot at 5-over. Tim Fleming, director of golf at Oklahoma City Golf & Country Club, had a rough back nine Tuesday and shot 76 to finish at 7 over.

With three rounds completed, the PGA Professional Championship field has been trimmed for the second time. Seventy-five players will tee off for Wednesday’s final round.

Phillips, 59, son of former long-time Cedar Ridge professional Buddy Phillips, was one of the top-ranked juniors in the nation and won the PGA Junior Championship 42 years ago in 1980. He played collegiately at Oklahoma State, earning All-American honors. He did not play competitively for 20 years after leaving OSU due to frustration with swing changes he made leading to erratic driving, but has been one of the top players in the South Central Section since resuming his career around 2010, qualifying for the 2015 Senior PGA Championship.