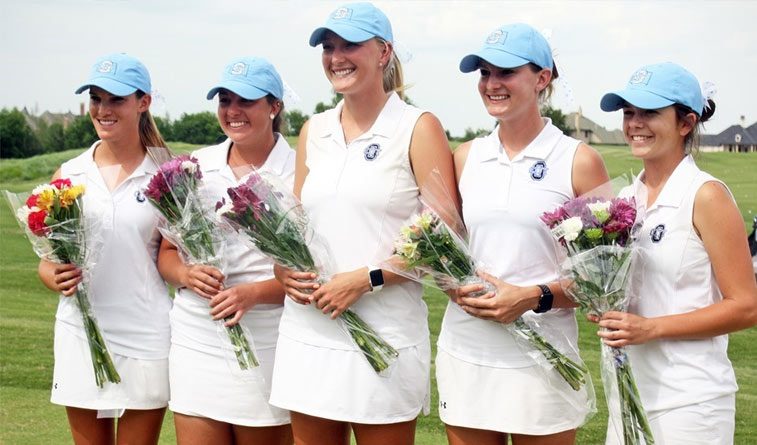 The Stars tee off their first round at 8 a.m. CDT Tuesday off the first hole. Oklahoma City held the third spot in the last rankings. Live scoring is available for the 72-hole tournament.

The Stars include five seniors on the 2016-17 team – Raegan Barnes, Kailey Campbell, Caroline Goodin, Anna Mikish and Katie-Lee Wilson. Over the past four years, OCU has taken four SAC championships plus the 2014 national championship, rallying to win a playoff and boasting of a 5-under-par performance on the last regulation hole.

“I couldn’t have asked for five better individuals,” OCU coach Marty McCauley said of his five seniors. “It’s a very special group. They’re wonderful kids. They’ve excelled athletically, academically and socially, which you can’t ask more for them to do all three. The legacy they leave going forward to the next generation of Oklahoma City University women’s golf players will be everlasting. They’ve set the bar really high and have done a wonderful job advancing that. I couldn’t be prouder of them.”

Goodin said, “Our senior class is I would say the backbone of the team. It’s the majority of us. We have the most experience. We have dealt with the highs, the lows and just about everything in between – some pressure situations.”

Mikish, a senior from Choctaw, Okla., leads OCU with a 75.83 stroke average, 58 birdies and one eagle. This season, the three-time all-American provided the Stars with a runner-up finish in the SAC Championships and a victory in the Susie Maxwell Berning Classic for the second year in a row.

Goodin has posted a 76.57 scoring average, 43 birdies and an eagle this season. The two-time all-American took the O-City Classic, leading OCU to victory by a program-record 43 strokes. She collected her third all-SAC accolade.

Melissa Eldredge and Savannah Moody have been among the Stars’ top five in scoring average this season. Moody, a junior from Weatherford, Texas, owns a 76.96 scoring average, while Eldredge, a freshman from Eufaula, Okla., has forged a 78.13 stroke average. Eldredge garnered an all-SAC nod and SAC freshman of the year. Emma Allen, a junior from Broken Arrow, Okla., won her first career tournament title in the Claud Jacobs Invitational while turning in a 79.20 stroke average.

PGA National hosts the NAIA Championships for the first of a two-year stint at the par-72, 6,013-yard Squire course. Designed by Tom and George Fazio, The Squire is the shortest and most exacting of the courses at PGA National Resort. Accuracy with fairway woods and long irons is tested on many tees, and the new smaller “Emerald Bermuda” greens demand precise approach shots.