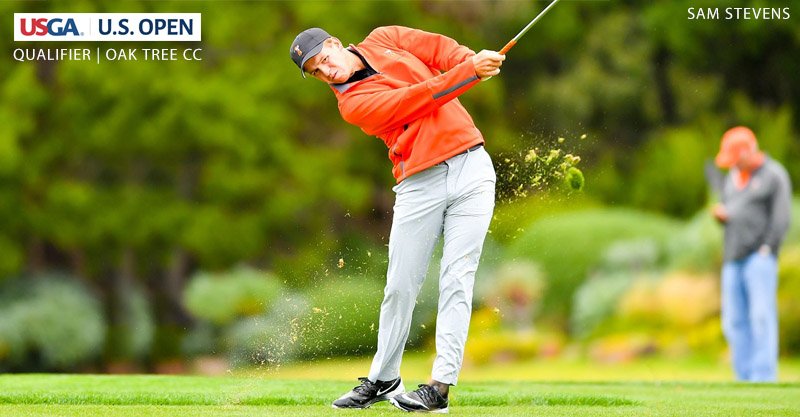 Current Cowboy Brian Stark also earned one of the four spots available to move on to sectional qualifying, shooting a 68 to finish a shot behind Mac Murphy of Decatur, Ala. The fourth spot went to Benjamin McCaslin of Dallas, who won a playoff against former Cowboy Zach Bauchou of Stillwater and current University of Oklahoma golfer Garett Reband. All shot 1-under 69. Bauchou is first alternate and Reband second alternate.

Stevens called his round “stress free.” He played his first nine holes in 1-under, then notched four birdies on the back nine to secure his spot in U.S. Open Sectionals.

“The northeast wind made the East Course play harder than it normally does.” said Stevens.

Playing in the same group with Stark, both limited their mistakes and grabbed two of the four qualifying spots up for grabs.

Stevens is from a royal golf family in Wichita where his dad and grandfather were both playing legends, but he is also well known in Oklahoma from the many Oklahoma Junior Golf Tour events in which he competed before signing with OSU. Unlike famous teammates Matthew Wolf and Viktor Hovland, he didn’t move straight to the PGA Tour, but he did dominate the All Pro Tour in 2020, winning three times, taking second once and pocketing over $100,000 in 10 events.

Stevens spent a short time living in Fort Worth, Texas, but after he and his wife had their second child has since moved back to Wichita. He has four events reamining to play on the Latin America Tour this spring after which he will attempt to earn Korn Ferry Tour status through Monday qualifying. The lack of a qualifying school in 2020 due to the pandemic hurt Stevens, as he was playing exceptionally well last summer and fall.

Stevens hopes to draw Dallas as his site for sectional qualifying and also plans on playing in the Byron Nelson Monday qualifier as well. If he is not in the Byron Nelson, you will be able to catch him in action in Oklahoma in the coming weeks in Shawnee at the APT event.

Brendon Jelley, who was Sevens’ teammate at OSU, also advanced by tying for the lead in a local qualifier at Amarillo Country Club on April 29. You can see all local qualifying results here.