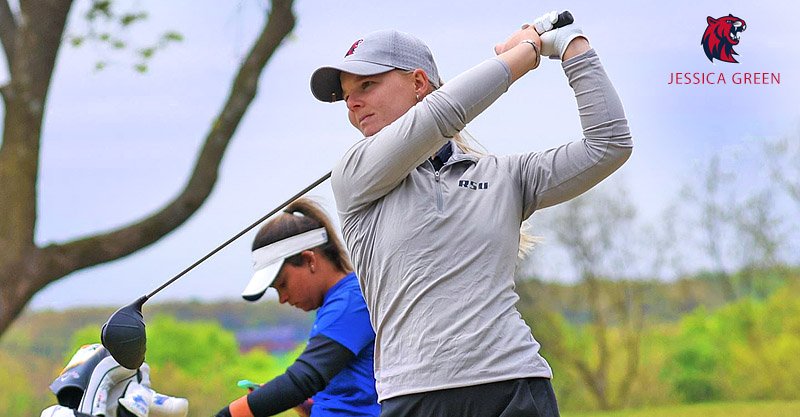 Green and the Hillcats both lead after day one. Green holds a five-shot lead over Allycia Gan (Missouri Western) for the individual lead. The Hillcats, who sit at +11, lead the team competition after round one, holding an eight-shot lead over Southwestern Oklahoma State and Arkansas Tech, who are tied at +19.

The junior started the day off with a birdie on the opening hole. After four-consecutive pars, Green reeled of three straight birdies on the par-5 sixth, par-3 seventh and par-4 eighth to move into the outright lead. Green closed the front nine with another par to sit at -4 at the turn.

On the back nine, Green opened up with another birdie and then scored back-to-back pars. On the 13th hole, Green picked up a birdie, but it was followed by the only blemish on the South African’s scorecard for the day as she bogeyed the par-4 14th. However, Green immediately responded with another birdie. After two more pars, she closed the round with a birdie on the par-5 18th to move to -7 for the round and stake claim to the records.

Green broke the Hillcat school record for a single round, which was previously held by current teammate Raquel Flores, who fired a 66 (-6) at the MIAA Preview Invitational on September 25, 2019. Green’s 65 on Monday also broke the St. Joseph Country Club women’s competitive course record.

Joining Green in the top five after round one is freshman Marelda Ayal, who sits in a tie for fourth overall at 74. Jaelynn Unger shot 79, Mariana Flores and Sydney Murray each shot 81.

Megan Brown and Rebecca Lau led Southwestern Oklahoma State as each shot 76. Mikaela Rindermann shot 77 and Zoe Morton was another shot back at 78.

Northeastern State is in fifth after the first round, led by Yasmin Hang, who shot 74 and is in fourth place. Aitana Hernandez and Kelly Swanson each shot 78 and Kaylee Pterson 82.

Central Oklahoma had a rough first round at 320 and is in eighth place, despite Emma Shelley’s round of 74. Susana Olivares shot 78, Madison O’Dell 82 and Emily Miller 86.